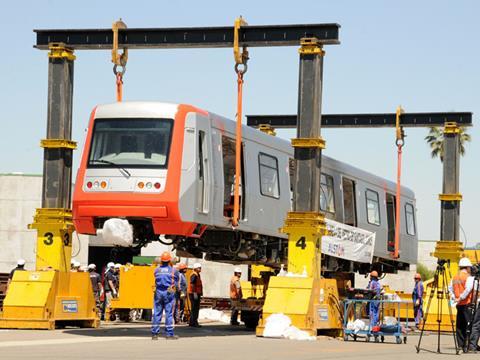 CHILE: Three Metropolis metro cars arrived in Santiago on December 15, the first of 36 cars being supplied by Alstom to supplement the fleet working steel-wheeled Lines 4 and 4A.

Assembled in São Paulo, the stainless steel cars are 22·7 m long and 2 900 mm wide. Traction motors and control equipment have been supplied by Alstom plants in Villeurbane, Tarbes and Ornans, whilst the Urbalis automatic train control was manufactured in Saint-Ouen.

Lines 4 and 4A have experienced significant growth in ridership and are now used by more than 750 000 passengers a day. Following trials at the depot the trains will enter service from March 2010, increasing capacity by more than 20%. Operated in a six-car formation, a complete trainset can accommodate 1 560 passengers, including 276 seated.