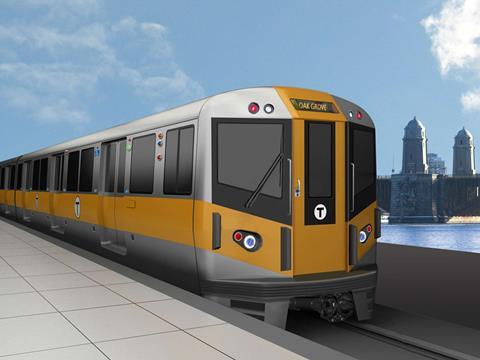 USA: Massachusetts Department of Transportation board voted to award the CNR MA joint venture of China CNR Corp and CNR Changchun Railway Vehicles a $430·2m contract to supply 284 metro cars for Boston’s Red and Orange lines on October 22. An option for 58 cars would take the value to $566·6m.

CNR MA submitted the lowest bid. Because it is CNR’s first contract to supply heavy metro cars to the North American market, MBTA has negotiated a number of contract provisions designed to mitigate risk. Two manufacturing lines in Changchun will be dedicated to the project, a letter of credit will provide an additional $100m in security beyond what was required, and there will be a project office and regular meetings with MBTA.

CNR MA intends to invest $60m of its own resources building a final assembly plant and test track at a former Westinghouse site at 655 Page Boulevard in Springfield, which would serve as CNR MA’s US headquarters. CNR MA estimates the facility would create more than 150 manufacturing and 100 construction jobs. The contract requires 60% domestic content, minority and women owned business enterprise participation, and final assembly in Massachusetts.

The 152 Orange Line cars will replace the existing rolling stock and also increase the fleet by 32 cars to enable peak headways to be reduced from 6 min to 4 min. The Red Line order covers 132 cars to replace the ‘No 1’ series vehicles, and an option for 58 cars which if exercised would enable replacement of No 2 cars.

The budget for the procurement of the Orange and Red Line vehicles is $801·3m, within a total project budget of $1·3bn, including depot expansion. This is to be funded entirely by state bonds.