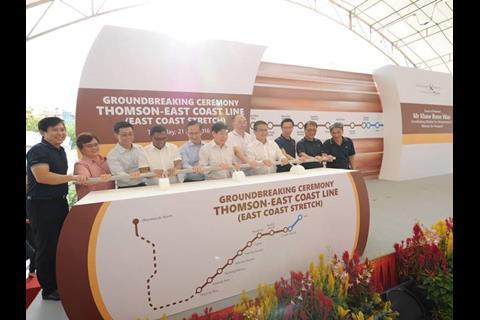 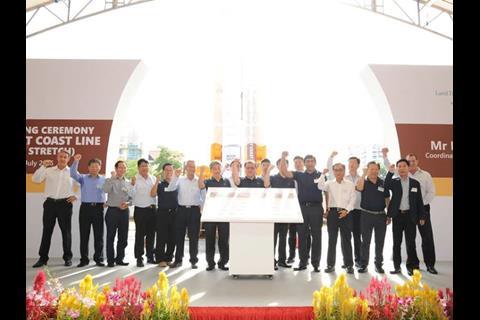 Work has started on the East Coast section of the Thomson-East Coast Line. The 13 km extension is being built in two phases. The seven stations from Tanjong Rhu to Bayshore are due to open in 2023, with the two at the eastern end the following year.

The entire section is being built on reclaimed land, necessitating 60 m deep diaphragm walls at stations, compared with the usual 25 m. At Tanjong Rhu station a cut-and-cover tunnel is to be built above the Kallang-Paya Lebar Expressway tunnel, with a 40 cm clearance between the two.

The East Coast stretch forms part of the 43 km long Thomson-East Coast Line. When complete, it is expected to carry 500 000 passengers a day initially, with ridership rising to 1 million passengers a day in the longer term. Land Transport Authority is studying a further extension from Sungei Bedok to the future Changi Airport Terminal 5 and the existing Changi Airport station on the East-West Line.

Ground was also broken on the Downtown Line 3 Extension. The 2·2 km alignment will take the line from Expo to Xilin and Sungei Bedok, the eastern terminus of the Thomson-East Coast Line.

Opening is planned for 2024, when the East Coast Integrated Depot is also due to open; work also started on the depot on July 21. As well as housing Downtown Line trains, the 36 ha site with space for 220 trains will include the Thomson-East Coast Line and East-West Line depots, which will be stacked. There will also be a bus depot alongside. The main train depot building will be more than 1 km long and consist of 18 000 precast beams, each up to 20 m long. GS Engineering & Construction Corp is carrying out civil works under a S$2bn contract awarded in March.