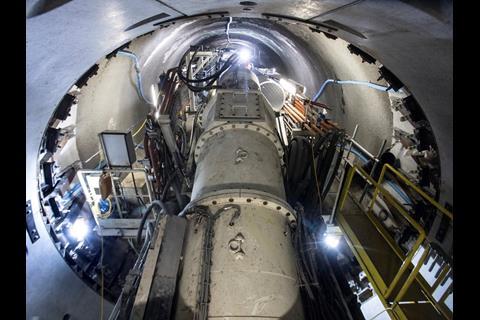 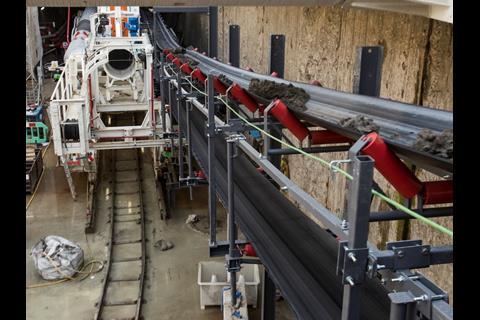 UK: Tunnelling has started on London Underground’s Northern Line extension. Tunnel boring machine Helen has started boring a 5·2 m diameter tunnel at a depth of 26 m, and sister machine Amy is due to start the other bore in about a month.

The two TBMs supplied by NFM Technologies were lowered into the ground at Battersea in February. Each 100 m long TBM is capable of boring up to 30 m per day, and is operated with a team of 50 people.

Tunnelling is expected to take six months and will involve the installation of almost 20 000 precast concrete segments. Spoil is being taken by conveyor to barges on the River Thames, from where 92% of it will be taken and taken to Goshems Farm in East Tilbury, where it will be used to create farmland.

The 3·3 km extension from Kennington to Battersea will have an intermediate station at Nine Elms. Construction is being undertaken by Ferrovial Agroman Laing O’Rourke under a six-year design-build contract awarded in 2014. Most of the estimated £1·2bn project cost is coming from the private sector through a package agreed between the government, Mayor of London, Wandsworth and Lambeth councils, and Battersea Power Station. This includes the creation of a 25-year Enterprise Zone from 2016.