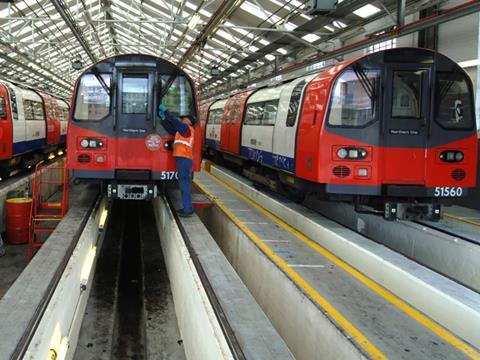 UK: Planned upgrades to increase service frequencies on London Underground’s Jubilee and Northern lines, including the procurement of additional trainsets, have been temporarily ‘paused’, Transport for London has confirmed.

TfL said the decision to pause the World Class Capacity project had been taken in the light of other ongoing upgrades and changes to travel patterns expected when the Crossrail Elizabeth Line opens.

‘The benefits from the largest investment programme in the Tube's history, combined with the huge capacity increases coming soon from the arrival of the Elizabeth Line, means that we are temporarily pausing our plans to buy more trains for the Jubilee and Northern lines’, according to London Underground’s Director for Strategy & Network Development David Hughes.

‘Our modernisation programme and in-depth technical work by our new combined engineering division has improved performance and reliability’, Hughes said. ‘This means we can increase the frequency of our existing trains without the immediate need for new trains’.

TfL said new timetables to be brought in from January would boost capacity and extend the peak service hours. A refurbishment of the existing Northern Line fleet was completed in 2015, and the Jubilee Line fleet is currently being refurbished.

TfL predicts that the Elizabeth Line will ‘transform’ how passengers get around London, and as a result it is expecting nearly 10 000 fewer eastbound Jubilee Line trips being made each day, and 5 500 fewer trips from Stratford to Canary Wharf. In addition, the return of a full Thameslink rail service to London Bridge station once the Thameslink Programme of upgrades is completed is expected to reduce westbound demand on the Jubilee Line from Canada Water.