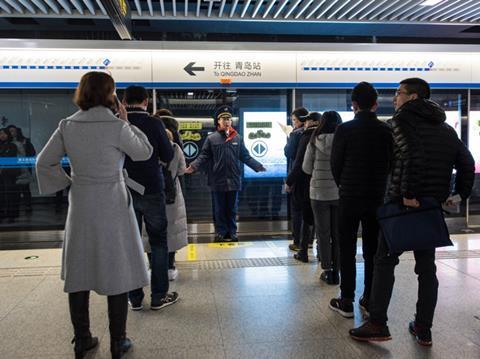 Construction of Line 2 was approved in August 2012. Work began three months later, and test running got underway in August 2017.

The line is electrified using a 1·5 kV DC third rail system. CRRC Qingdao Sifang has supplied 25 six-car Type B trainsets which are 118 m long and have a capacity of 1 896 passengers. These are maintained in a depot between Tonganlu and Liaoyang Donglu stations.

The line is to be extended 4·0 km westwards from Zhiquan Lu to Taishanlu adding four stations, and a further extension from Taishanlu under Jiaozhou Bay to Expo Garden would add 13 stations. To the northeast, a planned extension from Licun Gongyuan to Liuhuapo would add six stations.

On completion, these extensions would take Line 2 to 61·3 km and 41 stations.