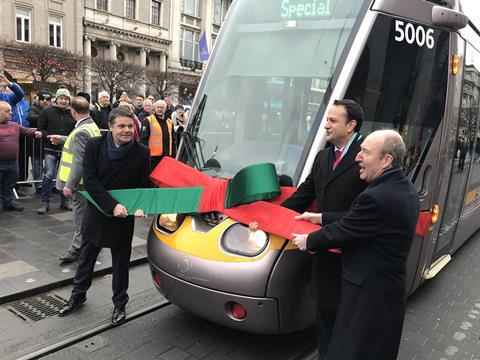 The €368m project to build the 5·9 km extension north from St Stephen’s Green to Broombridge with 13 stops was given the go-ahead in August 2012. A joint venture of John Sisk & Son and Steconfer was the main contractor, with work getting underway in June 2013.

The route includes a single track loop, with northbound and southbound services running on different streets between College Green and Parnell Street. Green Line trams travelling into the city centre from the south no longer terminate at St Stephen’s Green, but instead continue through the city centre to O’Connell Upper and then either run back around the loop southbound via the Parnell stop or continue north to Broombridge via Dominick. The journey time from St Stephen’s Green to Broombridge is around 25 min.

Passengers can interchange between the north – south Green Line and east – west Red Line with short walks at the O’Connell - GPO, Abbey Street and Marlborough stops, depending on their direction of travel.

‘Today is a great day for public transport in Dublin’, said Lord Mayor Mícheál MacDonncha. ‘I believe this will be transformative, making commuting easier for workers and helping to lift businesses and services on and near the Luas route. I commend all involved in helping to deliver this key new infrastructure for Dublin, including Dublin City Council. The construction has been disruptive for many but I believe it will have been worth the wait. The key to traffic problems in our city is more and better public transport including trams, buses and trains. The development of this infrastructure must continue.’