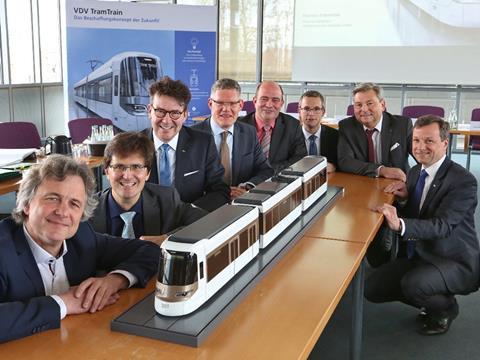 Karlsruhe transport operators AVG and VBK, along with Erms-Neckar-Bahn, Saarbahn Netz and Chemnitz transport authority VMS are working together as part of the VDV TramTrain project, which was inaugurated in 2017 and is led by VBK’s Thorsten Erlenkötter. As the largest partners, which will together procure around 150 vehicles, VBK and AVG will carry out the procurement on behalf of all five partners.

Tenders are due to be called later this year, and the vehicles are expected to enter service from 2025. The five partners have jointly developed a specifications for a common vehicle standard. To overcome variations in infrastructure, such as different platform heights, between the participating cities, the intention is to specify a uniform bodyshell and traction system, which could then be customised for each city.

‘We are not competitors, but rather have the same goal of making public transport more attractive’, said Saarbahn Managing Director Peter Edlinger. ‘Saarbahn wants the new tram-trains to replace its 28 vehicles, the larger part of which have been in service since 1997.’