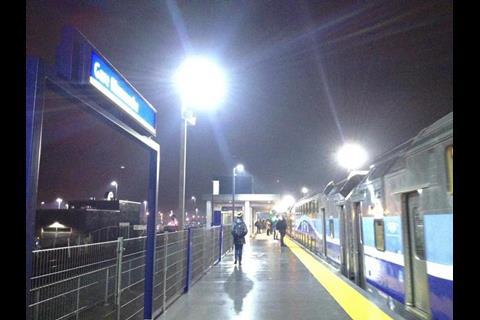 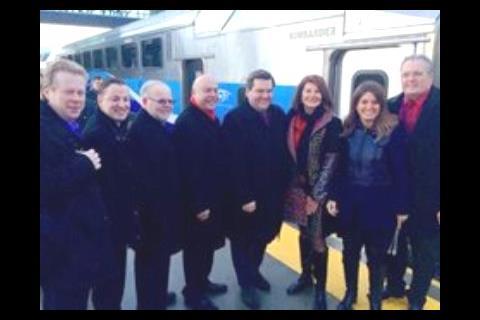 CANADA: Montréal commuter rail operator Agence Métropolitaine de Transport finally began revenue service on its 52 km Train de l’Est route from Montréal Central to Mascouche on December 1, around three years later than previously anticipated. Serving a region with around 700 000 inhabitants, the route had been expected to open during 2012. Out-turn cost is put at C$671m, against a previous estimate of C$435m.

The route incorporates 9 km of AMT’s existing 25 kV 60 Hz electrified Deux-Montagnes line from Montréal Central through the Mount Royal tunnel, before diverging to the east. The trains then follow an existing CN freight line across the north of Montréal Island, paralleling the Rivière des Prairies through Anjou to Point-aux-Trembles. After crossing the river to Repentigny, the commuter trains use 11·6 km of new railway built along the median strip of Québec Route 640, before joining Genesee & Wyoming’s Quebec-Gatineau Railway on the approach to Mascouche.

The line currently serves 11 stations, plus three existing stops on the Deux-Montagnes route. Feeder bus services connect with the trains at several stations, while the new stop at Ahuntsic adjoins Chabanel station on AMT’s St-Jérome commuter route. Two more stations are expected to open in the spring of 2015, at Pointe-aux-Trembles and at Sauvé, which will provide interchange to the Orange Line of the city’s metro network.

The line is operated using five ALP-45 electro-diesel locomotives and 30 double-deck coaches drawn from a larger fleet supplied by Bombardier in 2010-12. AMT is initially providing eight trains each way per day, mainly at peak times. Offering an end-to-end journey time of 65 min, the service is expected to attract around 11 000 passengers per day.