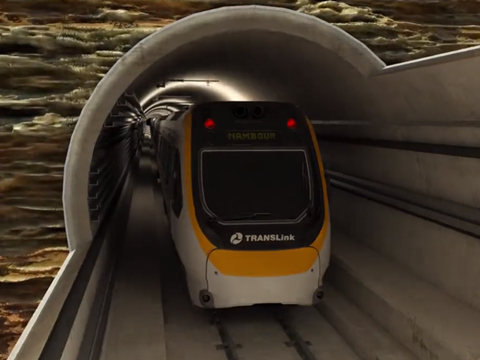 Enabling works are already underway for the 10·2 km line linking Bowen Hills with Dutton Park, and major construction is expected to get underway before the end of the year. This would see the first trains running in 2024.

The Tunnel, Stations & Development PPP concession has been awarded to the Pulse consortium led by CIMIC Group’s Pacific Partnerships, which will provide 49% of the equity finance. Other equity partners include DIF, BAM PPP PGM and Ghella Investments. CIMIC’s CPB Contractors will undertake design and construction of the 5·9 km twin-bore tunnels and the four underground stations at Boggo Road, Woolloongabba, Albert Street and Roma Street in a joint venture with Ghella and BAM International. UGL will be responsible for mechanical and electrical works, as well as providing maintenance services over 24 years.

The Rail, Integration & Systems package will be delivered by the Unity Alliance, which also includes CPB Contractors and UGL, along with AECOM, Jacobs, Hassel, RCS Australia, Acmena, Martinus Rail and Wired Overhead Solutions. This package includes the integration of the new line into the existing Queensland Rail suburban network.

The third contract, covering the supply and installation of ETCS Level 2, has been awarded to Hitachi Rail STS. Queensland is investing A$634m to roll out ETCS across much of the Brisbane suburban network, and the Delivery Authority will be responsible for overseeing the integration of the ETCS with delivery of the New Generation Rollingstock fleet.

Announcing the contract awards on April 4, Queensland’s Deputy Premier and State Treasurer Jackie Trad said the state had fully-funded the project in the absence of federal support; last year Infrastructure Australia rejected its cost-benefit analysis and raised doubts over the projected ridership figures. However, Trad insisted that ‘as one of Australia’s fastest growing regions we have to build the infrastructure now to ensure we keep pace with this growth’.

Premier Annastacia Palaszczuk said ‘this megaproject is a defining moment for Queensland, and vital as our population booms. As well as improving connectivity across the entire southeast, it will create new precincts at Boggo Road, Woolloongabba, Albert Street, Roma Street and Exhibition, helping Brisbane evolve as a world-class city.’