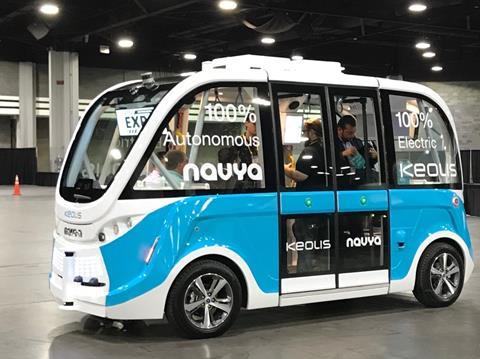 USA: Keolis Transit America used the APTA Expo in Atlanta on October 8-11 to demonstrate the potential for autonomous bus shuttles to be used for ‘last mile’ public transport in urban and suburban applications.

The vehicle carried passengers within a demonstration zone in the main exhibition hall of the show, building upon trials of the vehicle that have already taken place in France, Switzerland and Las Vegas. The battery-electric bidirectional vehicle has been designed by Navya, a French technology company, and has a capacity for up to 11 seated passengers and four standees. Maximum operating speed during the trial is 7 km/h and the vehicle can operate for up to 13 h on a single charge.

Navigation and obstacle detection is undertaken using a four-step process that combines radar, LIDAR, GPS and camera scanning, along with algorithmic processing of geographical and geotechnical data. Nicolas de Cremiers, Marketing Director at Navya, explained that the company uses a ‘route scrubbing’ method when the vehicles are initially deployed, allowing initial camera and scanning data to be analysed and refined by back-office teams before the vehicles are deployed with passengers. ‘From the trials in Paris and Las Vegas that have taken place so far, we feel it takes around three weeks for people to get used to having autonomous vehicles in their daily environment’, de Cremiers added. Currently the shuttles have operated in ‘shared space’ with pedestrians but not other road vehicles.

Reflecting what the company sees as the huge potential for autonomous last mile shuttles in North America, Navya plans to begin manufacturing the vehicles at a site in Ann Arbor before the end of the year. ‘We are creating a new era of mobility’, de Cremiers believes, although he recognised that ‘significant challenges’ remained before autonomous shuttles could be widely adopted. ‘Human behaviour is the biggest obstacle. The technology and regulatory hurdles are being overcome already, but getting humans to trust autonomous vehicles and leave their private cars behind will take more time.’

Keolis has been the operating partner for trials of the Navya shuttle in the public transport market both in Europe and North America. ‘The USA is not yet ready to go fully autonomous’, suggested Maurice Bell, Vice President for Mobility Solutions at Keolis Transit America. Widespread adoption ‘could take up to 10 years’, he felt, but the economic advantages of the operating model were likely to appeal to many city authorities, especially where on-demand options could replace full-scale bus operations. ‘Equally I envisage 10 or 15 of these shuttles operating in tandem — that would mean the end of the streetcar in urban centres’, he added.