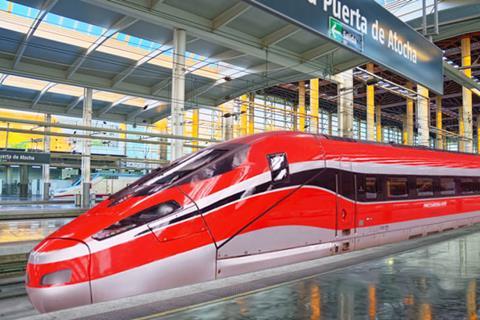 SPAIN: Trenitalia has signed an €797m contract for a partnership of Hitachi Rail (60%) and Bombardier Transportation (40%) to supply 23 ETR1000 high speed trainsets for use by Intermodalidad de Levante, the future Spanish open access operator which is owned by the Italian national operator (45%) and Air Nostrum (55%).

Designed for operation at up to 360 km/h, the ETR1000 is based on Bombardier’s V300Zefiro platform, and branded Frecciarossa 1000 by Trenitalia which has operated the type in Italy since 2015. Last year the operator ordered an extra 14 sets to augment its initial 50. Five units are being retrofitted for use on the Milano – Paris route, and two have been on test in France.

The trainsets for ILSA will also be built in Italy. The 200 m long sets will have a capacity to carry around 460 passengers and facilities including wi-fi and a bistro area.

Trenitalia’s operation of similar trainsets in its home market has ‘transformed passenger transport on high speed lines in Italy, setting the standard and becoming the fastest and most admired train in Europe’, by offering ‘comfort, sustainability, style, performance and low noise’, said Hitachi Rail Group CEO Andy Barr when the ILSA contract was announced on August 10.

ILSA is targeting March 1 2022 as the start date for its services, having been allocated indicative train paths on bundles of routes: