ERL Desiros take to the rails 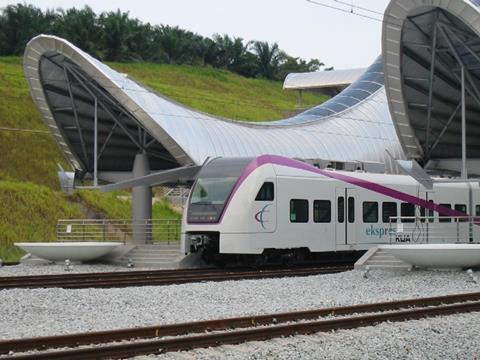 LAST MONTH Siemens Transportation Systems rolled out at Wien the first of 12 articulated EMUs destined to work the express rail link to Kuala Lumpur International Airport. Following test running in Germany, the initial units are due to arrive in Malaysia in September.

The trains will offer a high level of comfort in a pleasant atmosphere, providing a fast, stress-free and environmentally-friendly alternative to bus or taxi. Both outbound and inbound luggage will be checked through to Kuala Lumpur Sentral, being handled in a special baggage compartment.

ERL will also offer stopping trains to serve three intermediate stations along the route. This will be marketed as Commuter Rail Service, and is being designed for large numbers of passengers requiring fast boarding and alighting. CRS journey time will be 37min, including stops at Bandar Tasik Selatan, Putrajaya and Salak Tinggi, where the ERL operations centre and workshop are located.

Both types of train are being built to the Siemens Desiro modular design, sharing many similarities with the Slovenian and Greek EMUs already in production. Following the completion of the first trainset, assembly of the remaining bodyshells is in full swing at Krefeld.

Each unit is formed as an articulated four-car set, which can be coupled to form trains of up to three units. Articulation allows the use of wide gangways between cars. The bodies are formed from large extruded aluminium sections welded together in a monocoque construction. The loading gauge conforms to UIC standard 505. Most fittings are attached with a C-rail fastening system. The driving cab ends are formed from glass-fibre reinforced plastic, to create an elegant shape.

A low floor height 798 mm above rail provides for level access from the high platforms. Each vehicle has its own high performance air-conditioning pack to ensure comfortable travelling conditions despite the region's high ambient temperatures.

Although based on a common design, the ERL and CRS trains are optimised for the services they will work. The biggest differences lie in the interior furnishings. The eight ERL units have more comfortable seats, carpets, a toilet, and a separate luggage compartment. The attractive exterior livery uses adhesive film to impart the impression of an aircraft taking off.

The four CRS trains have fewer seats to provide more room for standing passengers on short journeys. The floors are laid with a rugged plastic covering, and the finish is designed to be fresh and colourful.

Both designs have glazed luggage racks at the sides, and glass partitions at the entrance vestibules. All glazed surfaces are tinted with the same green shade as the external windows. ERL trains also have blinds on the windows. A ceiling design with large lights in the passenger area gives an impression of spaciousness, and contrasts with the opposing curved ceiling with halogen lighting in the entrance area. Each car has four double-leaf swing plug doors.

ERL trains will operate from air-conditioned platforms with automatic screen doors. Synchronisation between the train and platform screen doors is obtained using an infrared link. To facilitate punctual departures, a view of the platform is transmitted to a display in the driver's cab.

The passenger information system provides automatic announcements, emergency call points in the passenger areas, and destination indicators at the ends of the train. Preparations have been made for retrospective fitting of video entertainment equipment and CD players if required.

Three different types of bogie are used. The powered end bogies have a 2200mm wheelbase, whilst the articulation bogies - both powered and unpowered - have a longer wheelbase of 2700mm. All three use rubber spring elements for the primary suspension, and airbag secondary suspension to support the car body.

The traction equipment also incorporates a high degree of redundancy. The traction drives are partially suspended, the motors fixed to the bogie frame, the gears are axle-mounted and are driven through a spiral-toothed coupling. Electro-pneumatic brakes are fitted, with wheel-mounted brake discs on all driven axles.

The two water-cooled GTO traction converters each have a four-quadrant chopper on the input side to minimise supply interference, and to permit regenerative braking. On the output side, a variable voltage, variable frequency three-phase supply feeds the asynchronous traction motors, which are also water-cooled. Each converter feeds four motors. The water is cooled by two roof-mounted units.

Two well-proven Sibas 32 traction control systems are fitted on each unit. These communicate with lower level devices including Westinghouse brake controllers, door controllers and a decentralised Sibas-Klip peripheral controller via a redundant train communication network. This incorporates both a multi-function vehicle bus and a wire train bus for multiple operation. Throughout the design, a strong emphasis on modular construction provides for rapid maintenance and repair through replacement.

Automatic train protection is based on the Siemens' ZSL90 design, which provides a mix of intermittent and continuous control, ensuring safe operation at high speeds and allowing short headways. A dead man's control is provided, and the driver can communicate with the control centre by radio at any time. In an emergency the radio link can also be used to relay announcements directly to the passengers.

The 25 kV 50Hz supply is collected via a single-arm pantograph, and distributed redundantly through the train (Fig 1). Two air/oil-cooled transformers feed the traction converters and auxiliary inverters. Two vacuum circuit breakers each isolate two vehicles from the network.

Two 150 kVA IGBT inverters supply power to the on-train auxiliaries. They provide both sine wave filtered 400V at 50Hz and 110VDC. The battery chargers, fed by the DC link, are integrated. Two 230V 50Hz sockets are available inside the train. The two circuits are inter-connected to ensure that all critical systems continue to function if one auxiliary inverter fails.

The SYZ consortium led by Siemens is responsible for the entire project apart from the terminal stations. This includes the provision and installation of tracks, overhead line and power supplies, signalling and communications, workshop equipment and the trains. Operation and maintenance will be the responsibility of a joint venture between ERL SB and Siemens.

This company, E-MAS, will be 51% owned by Siemens. There is intensive co-operation between E-MAS and the construction consortium, with particular emphasis on documentation, spares and training to ensure a successful start-up.

Construction is making good progress, with 66% of the civil works and 70% of the E&M works finished by the end of March. The project is on course to achieve the contractual handover dates of April 20 2002 for ERL and June 20 2002 for CRS.

Major construction work has been finished at the first station, administration buildings and depot, enabling fitting out to begin. Tracklaying has been completed in four of the seven sectors, and catenary installation is following closely behind; this has already been completed in two sectors.

The power substation is being fitted out, and installation of SCADA and telecommunications will begin shortly. Factory acceptance tests for the signalling are currently in progress.