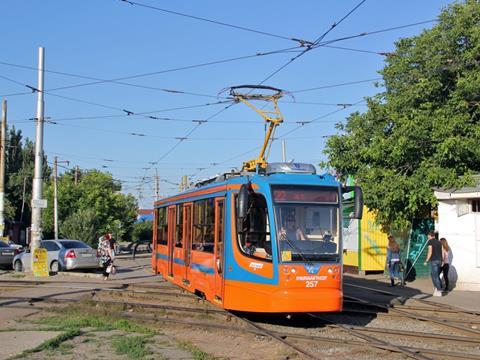 RUSSIA: The southwestern city of Krasnodar has opted to develop its legacy tramway to support rapid economic development and combat worsening road congestion.

On May 17, the municipality outlined the findings of a regional transport infrastructure plan worth 51·7bn roubles that has been developed by Moscow Higher School of Economics with consultancy A+S Transproject. The study has recommended retaining trams as the core high capacity transport mode, with the authors advocating substantial investment and network expansion.

The tram network dates back to 1900 and today totals approximately 50 km with 13 routes. The transport plan calls for the commercial speed of the network to be raised from 15·6 km/h to around 19 km/h, while network development would focus on providing direct access by tram to new residential developments across the city.

Short-term priorities include extensions totalling 8·7 km which would serve the northern part of the Moskovskaya Ulitsa Gidrostroy housing complex and the city’s international airport. Further expansion would occur gradually over the next 15 years so that by 2033 a further 48·8 km will have been added.

The expansion would be supported by the acquisition of around 100 new trams over the next three years to augment the present 268-strong fleet, and an additional depot is also to be funded.

The proposals are also designed to complement the planned development of a local suburban rail network, announced in March.