The freedom to do things differently 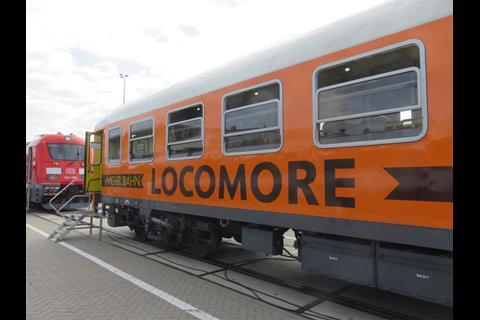 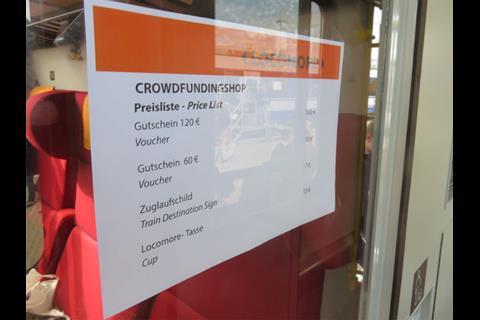 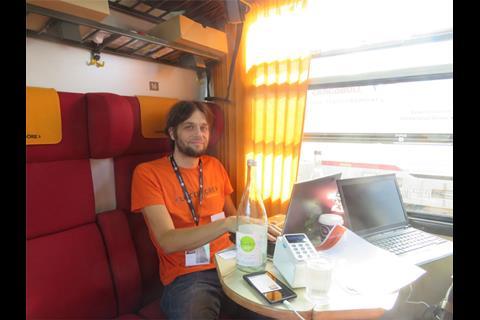 INNOTRANS: Locomore describes itself as the 'world's first crowd-funded railway', but the innovative approach to financing the planned launch of an open access inter-city service between Berlin and Stuttgart is only one of the things it is doing differently, according to Managing Director Nicolas Dietrich.

Dietrich was talking to Railway Gazette from his temporary office in one of the compartments of Locomore's first refurbished coach, which is on display at InnoTrans.

As well the laptop and other accoutrements of a start-up business, the compartment is filled with boxes of Locomore-branded mugs and memorabilia on sale to support the funding drive, along with vouchers that can be exchanged for tickets on the future services.

The fund raising campaign has raised loans from around 300 people, with around €500 000 raised in total of which about €70 000 came from advance ticket sales.

Launching a new operator 'needs an experienced team' says Dietrich. 'We have to know a lot of things - and we are still learning.'

Some of the founders of Locomore were previously involved in the launch of Hamburg-Köln-Express, and Dietrich says that they have brought their knowledge of the railway sector and understanding of the liberalised market to this new venture.

But Locomore will be different, Dietrich says, as it does not need to please corporate investors. 'We have full control', he says. 'We can do what we think is right, not what an investor thinks.'

There is a commitment to sustainability, with the company taking advantage of the opening up of the German traction electricity market to source its power from sustainable sources. Bicycles will be carried, and the buffet car will offer a range of vegetarian food.

Dietrich says an understanding of the 'theoretically liberalised' German market is vital for success. The now defunct InterConnex service played a role in ensuring that open access operators' timetable information is made available at the incumbent operator's stations, and Dietrich hopes that similar rules will come into force for ticket sales.

The first Locomore passenger train is expected to run on December 14, with traction provided by Hector Rail. The company is starting small, with an initial service of one Stuttgart - Berlin return train a day, but has plans for additional trains as well as the launch in 2017-18 of new services from Berlin to Bonn and Binz (Rügen) and from Frankfurt to München

Nine coaches are being refurbished; four with air-conditioning and five without. The coach on show at InnoTrans has themed compartments, including family, games, literature, business start-up and Spanish conversation.

Locomore's journey times will be longer than with Deutsche Bahn, but Dietrich sees DB as a premium product. He says not everyone can afford DB's fares for short-notice travel, while not everyone needs to travel at a particular time or requires flexibility. But in keeping with the sustainability ethos, Locomore's model is not based on taking traffic from DB; instead it wants to win traffic from the roads and airlines.

'We don't want to steal the market from DB', says Dietrich. 'We believe in rail.'