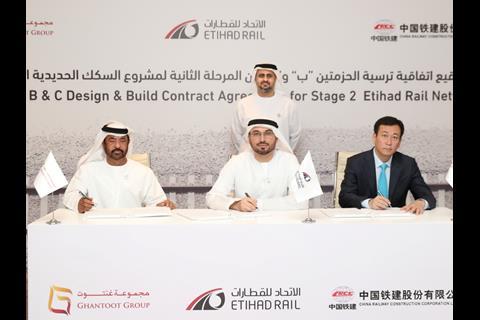 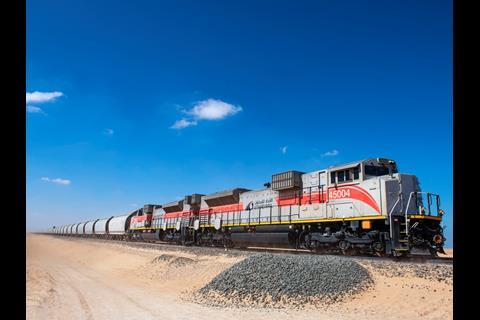 UAE: Etihad Rail has awarded the next two civil engineering and track works contracts for the construction of Stage Two of the national railway network.

With a total value of 4·4bn dirhams, the 216 km Package B and 94 km Package C routes will form the backbone of the UAE’s national network, connecting Abu Dhabi and Dubai. The two packages include the links to Khalifa Port, Khalifa Industrial City (Kizad), and Jebel Ali Port, connecting the country’s key ports with its principal industrial and urban areas.

As well as the design and construction of rail infrastructure, including earthworks, bridges and tunnels, the contracts include tracklaying. The Package B route will connect with Package A and the Stage One line at Tarif, while Package C will form an end-on extension from Package B. Etihad Rail had previously awarded the design and build contract for Package A to a consortium of China State Construction Engineering Corp and South Korea’s SK Engineering & Construction.

Describing the railway as ‘one of the most important economic development projects in the UAE’, HH Sheikh Theyab said the award of the two contracts was another milestone in the development of the national network, which will eventually run for 1 200 km, linking Ghuweifat near the border with Saudi Arabia to the port of Fujairah on the east coast. ‘Etihad Rail will sustain the growth of our transport industry and freight carriage sector throughout the UAE, as railway systems are one of the most important means of transport on which countries depend to achieve their economic and social objectives’, he explained.