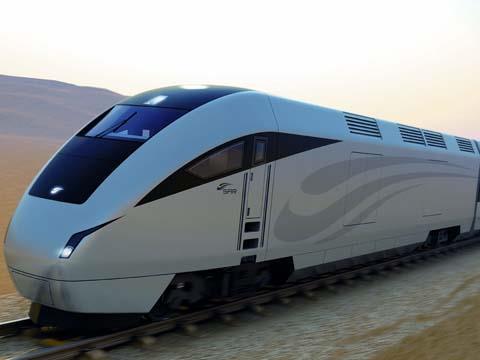 A joint venture of Fayez Zuhair and Germany's GTZ and Dornier has been awarded a 5·2m riyal contract to assist with the plan, which will forecast demand for 2010-40 and assess how to respond efficiently, including ways to attract private investment.

SRO's 2011 budget approved on January 19 focuses on developing the two routes between the Gulf port of Damman and Riyadh, which diverge at Hofuf where a rail bypass is planned. Summit Consulting, Irolli Trading and UK firm The Railway Consultancy have been appointed to advise on making the best use of the single-track routes, where current traffic of around five trains per direction per day is expected to increase as the network expands and international links are completed. The consortium will also produce an specification for a container 'dry port' at Hofuf.

The direct Hofuf – Riyadh route is now being doubled, with Archirodon awarded a 382·8m riyal contract to complete the last 150 km by mid-2012. Along with 28 bridges to eliminate level crossings this will allow an increase from 160 km/h to 200 km/h running when eight CAF passenger trains enter service this year. The target is to offer a 3 h journey time for the 449 km from Riyadh to Dammam. An unpaved road alongside the line will facilitate maintenance.

Al Yamama Group has a 59·8m riyal contract to renew 41 km of the freight route, which will also be fenced. SRO has recently taken delivery of 225 well wagons to enable the operation of 1000 m double-stack container trains, and the 2011 budget also includes acquisition of 10 locomotives and investment in signalling.

The Railway Consultancy has also undertaken outline studies for a 700 km line to link the planned Landbridge freight line with Taif, Khamis Mushayt and Abha, and a 660 km line from Jeddah south to Jizan on the Red Sea. A 300 km line running north from Jeddah to Yanbu is also proposed.