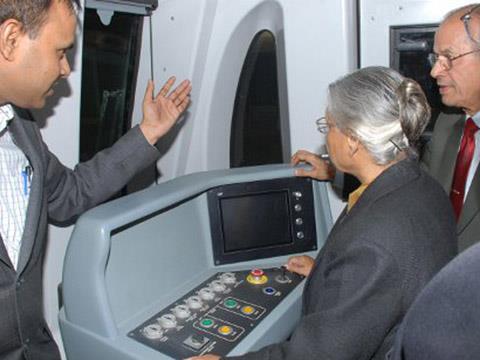 The stations at New Delhi, Shivaji Stadium, IGI Airport and Dwarka Sector 21 are now open, with intermediate stops at Dhaula Kuan and Delhi Aerocity to follow later this year. Trains initially run every 20 min from 06.00 to 22.00 and take 18 min to cover the 22·7 km route, compared with up to hour by road.

The Airport Express has been developed under a PPP concession awarded by Delhi Metro Rail Corp in January 2008, when the opening was planned for July 2010 to be ready for the Commonwealth Games.

DMRC was responsible for tunnelling and civil works. It awarded the 30-year operating concession to a joint venture of utility group Reliance Infra and Spanish rolling stock firm CAF, which supplied the eight six-car 25 kV EMUs.

The total cost of the project was Rs57bn, of which the concessionaire invested Rs28bn and will pay fees on a revenue-share model.