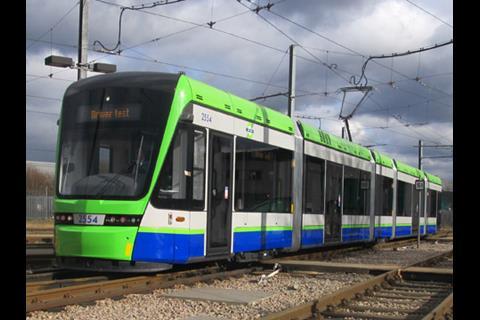 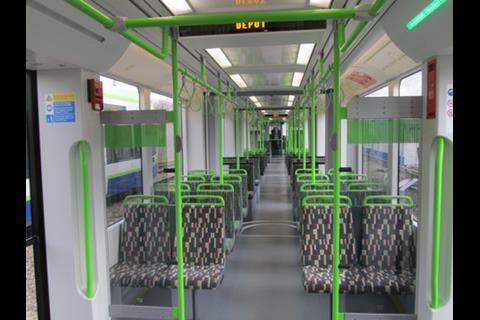 UK: London Tramlink is preparing to put the first of its six new Stadler Rail Variobahn trams into service by the end of February, with the rest scheduled to arrive at a rate of around one a month ready for the launch of a new Line 4 service in June.

Minor alternations to platform edges have been made to accommodate the new 100% low-floor cars, and the Therapia Lane depot is currently being expanded to provide more stabling sidings and space for spare parts. Training of the 118 Tramlink drivers is now underway, with familiarisation with the new trams taking around two days.

Improving reliability on the Croydon - Wimbledon route is key to the launch of Line 4 in June. This service will run between Elmers End and Therapia Lane, where the trams will reverse in the depot so they do not obstruct the running lines to Wimbledon. The Stadler cars are needed to introduce this service, but will not be dedicated to the route and will operate throughout the network mixed with the current fleet of 24 Bombardier CR4000 cars.

Contracts are to be signed imminently for works to double the Mitcham - Mitcham Junction section of the Wimbledon line, eliminating one of the current bottlenecks. Pre-feasibility discussions are also underway with Network Rail for a second Tramlink platform at Wimbledon.

The £16·3m contract for the new Stadler trams was signed in August 2011, with a £3m contribution from Croydon council. Rapid delivery was a key requirement, and the first three trams are being diverted from an order placed by Bybanen in Bergen, Norway. Few changes have been made for use in London, although an obstacle deflector has been fitted below the cab and changes made to the front end to discourage 'tram surfing'. Tramlink decided to use perch seats where Bergen has tip-up seats, and having discussed the subject Bergen has decided to make the same change.

Stadler will provide warranty support for two years, but general maintenance will be undertaken by Bombardier which is responsible for the current fleet. The contract with Stadler includes an option valid for 36 months covering up to eight more cars, subject to a minimum order for four.

Tramlink is keen to have a secure stabling facility on the east side of Croydon town centre for use when the network is divided by maintenance work, and former railway land at Woodside has been identified as a location.

Plans for Tramlink extensions to Crystal Palace are 'ready to go' should funding be allocated and the Mayor of London grant approval, and an extension from the Wimbledon line to Morden, St Helier and Sutton is also planned, possibly in three stages.