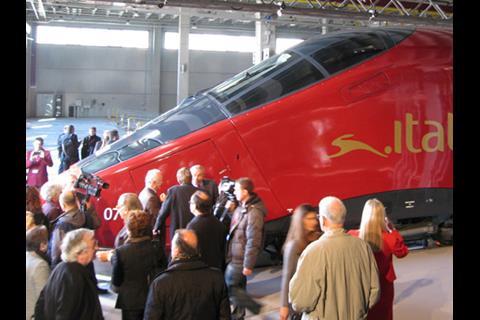 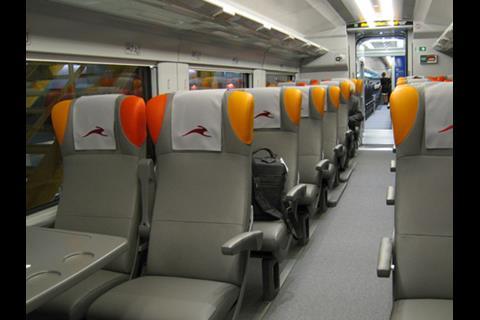 ITALY: Nuovo Trasporto Viaggiatori took the wraps off its first fully-fitted Italo AGV trainset on December 13. The 11-car dual-voltage trainset finished in deep red and lined with gold was unveiled to around 1 000 guests in NTV's workshop at Nola near Napoli. Among them was Guillaume Pepy, President of SNCF, which holds a 20% stake in NTV.

CEO Giuseppe Sciarrone said that NTV had completed all the tests needed for its Italo AGV trains to obtain certification to carry passengers and that the relevant documents were being examined by the Italian safety regulator. He promised to announce a start date for public services 'the day after we receive certification'. Obtaining certification is in the hands of train builder Alstom, which anticipates receiving the go-ahead in early February.

NTV now has seven trains based at Nola, and the company plans to begin 'pre-commercial service' in January or February. Each train will offer accommodation in three 'areas': Club, Prima and Smart. A 'Prima Relax' car is designated as a quiet coach and the 'Smart Cinema' car is fitted with ceiling-mounted screens. Fares will be structured on airline principles with yield management and 'aggressive' pricing in 'Smart'.

NTV services will be competing head-on against Trenitalia, which is revamping its ETR500 Frecciarossa fleet with four classes of accommodation. Trenitialia chief Mauro Moretti had unveiled the first refurbished ETR500 set on November 24.