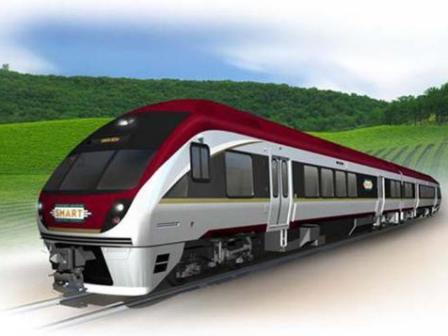 USA: The board of Sonoma-Marin Area Rail Transit voted unanimously on December 15 to award a US$56·9m contract for nine two-car diesel multiple-units to Sumitomo Corp and Nippon Sharyo.

The 18 vehicles will be assembled at Nippon Sharyo’s new factory in Rochelle, Illinois, in compliance with ‘Buy America’ rules, and are due to be delivered between October 2013 and May 2014. They are required to work the SMART commuter rail line between Cloverdale and Larkspur, the first phase of which is expected to open in late 2014.

The 112 km north-south route with 14 stations serving San Francisco’s North Bay will use a Northwestern Pacific Railroad alignment which runs parallel to Highway 101. A path for cyclists and pedestrians will be built alongside the line.

According to SMART, design and engineering activities will continue in 2011 with construction of the first phase scheduled for 2012-14. The US$695m project is being funded by a 25 cent sales tax approved in November 2008. However, with revenue less than expected owing to the recession, SMART voted in November to concentrate efforts on building the initial 103 km from Santa Rosa to Marin Civic Centre north of San Rafael.

SMART plans to operate 14 trains each way per day, with services running at 30 min intervals during the morning and evening peak periods. Each two-car unit will have 158 seats, and 24 primary and 14 secondary bicycle spaces. Projected ridership on the completed route is 5 300 passengers/day.

The contract includes an option for a further nine cars to extend the SMART trains to three cars as ridership grows, and further options for more than 100 vehicles for other transit agencies including Denver RTD, Portland TriMet and Harris County MTA in Houston. Nippon Sharyo opened its Rochelle facility in October to produce 160 gallery EMUs for Chicago’s Metra.

SMART’S RFP issued in April 2010 elicited six responses; Sumitomo was lowest bidder with a price of US$82·7m for 27 cars, more than US$20m cheaper than the next lowest bid.