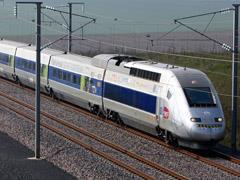 FRANCE: Visiting Montpellier on February 7, Transport Secretary Thierry Mariani signed an agreement with local authority representatives covering the programme for construction of the planned Contournement Nîmes - Montpellier bypass line which will carry high speed and freight trains around the two cities as an extension to the Nîmes branch from LGV Méditerranée.

The agreement with RFF, the Languedoc-Rousillon regional council, the Conseil général of Gard and the municipal administrations of Montpellier and Nîmes builds on an earlier agreement signed in December 2009 which covered financial and operational issues. The new deal sets timescales for key elements of the project, including the construction of new stations in both cities.

Signing of the agreement will allow RFF to start discussions 'in the next few days' with the bidders for the planned public-private partnership, with the aim of announcing a preferred bidder by the end of this year. Construction of the 80 km CNM route is estimated to cost around €1·6bn at 2007 prices. It is expected to reduce Paris - Montpellier journey times to 3 h and permit the expansion of local TER services on the existing line.

Noting the inauguration of the Perpignan - Figueres cross-border link on January 27, the transport ministry said it expected to see the start of public enquiries for the proposed high speed line between Montpellier and Perpignan by 2015, with a view to starting construction of this section by 2020.

Meeting on February 3, the board of the government's transport infrastructure funding agency AFITF adopted its budget for 2011, which includes a €1·7bn contribution towards the cost of the Tours - Bordeaux section of LGV Sud Europe Atlantique. Total cost of this line, which will cut 50 min off Paris - Bordeaux journey times, is put at around €7·8bn. RFF has already selected a group led by Vinci to undertake the PPP project with debt financing provided by nine commercial banks.