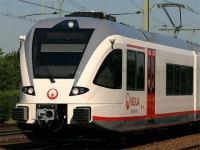 FRANCE: Veolia Environnement has confirmed its intention to sell its share of Veolia Transdev as part of a programme to reduce its debts, which will see the sale of €5bn of assets over the next two years.

At an Investor Day held in Paris on December 6, Veolia Environnement Chairman & CEO Antoine Frérot announced that the company would concentrate on its water, environmental services and energy services divisions. The utility firm would now seek buyers for its 50% stake in Veolia Transdev.

In May 2010 Veolia Environnement concluded an agreement with state bank Caisse des Dépôts to merge Transdev and Veolia Transport. This included a long-term intention to float Veolia Transdev through an IPO, probably in 2012.

The company now wants to reduce net financial debt to less than €12bn by the end of 2013 and to increase its financial flexbility.

‘The strategic plan that we are announcing today is going to drive a profound transformation of our company in order to adapt to the current economic and financial environment and to quickly position Veolia Environnement to capture the most attractive growth opportunities’, Frérot said.