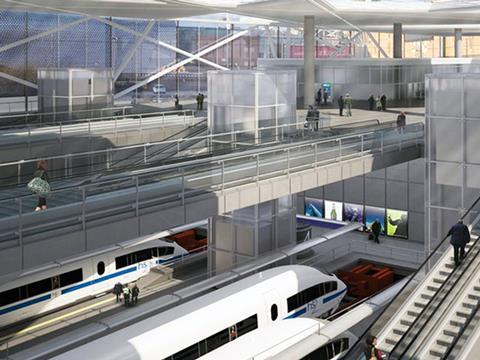 UK: The preferred bidders for two-stage contracts to design and build the civil works including bridges, tunnels, embankments and viaducts for High Speed 2 Phase 1 from London Euston to Birmingham and a junction with the West Coast Main Line near Handsacre were announced on July 17. The contracts are expected to be signed following the regulatory standstill period.

The Stage 1 (design) and Stage 2 (construction) contracts for HS2 Phase 1 have an estimated total value of £6·6bn. Preparatory works are already underway, and main construction works are expected to start in 2019, with the opening of the 225 route-km Phase 1 scheduled for 2026

Responding to the announcement, Balfour Beatty said being selected for two of the contracts reflected the ‘innovative and collaborative nature’ of its joint venture, which combines its knowledge of the UK market with Vinci’s experience of building the recently-opened Tours – Bordeaux line in France.

Meanwhile, the invitations to tender for the station design contracts for the four HS2 Phase 1 stations and the invitation to participate in dialogue for the Euston Master Development Partner contract have also been released to shortlisted bidders. These contracts are to be awarded early next year.

A bill was due to be introduced to parliament on July 17 seeking the necessary powers to construct Phase 2a of HS2 from Handsacre to Crewe. Secretary of State for Transport Chris Grayling was also due to update the House of Commons on the route of Phase 2b from Crewe to Manchester and from the West Midlands to Leeds.

‘HS2 will deliver vital links between some of our country’s biggest cities, helping to drive economic growth and productivity in the North and Midlands’, said Grayling when the preferred bidders were announced. ‘As well as better connecting our major cities, HS2 will help rebalance our economy. We will now get on with building the railway, while continuing to ensure affected communities get appropriate support and are treated with fairness, compassion and respect.’