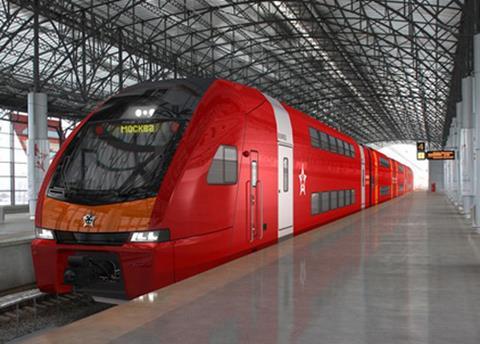 STADLER RAIL: Initial successes have been achieved under the strategy of targeting new markets and sectors to counteract the effect of the European debt crisis and changes in exchange rates, Stadler Rail said when presenting its annual results for 2013.

Orders with a total value of SFr2·6bn were received in 2013, including important contracts in central and eastern Europe. This marked a return to previous levels of orders after a dip to SFr0·7bn in 2012.

Full order books from 2008-10 helped to achieve a turnover of SFr2·5bn last year, with the delivery of around 250 trainsets and trams, but the low orders in 2012 mean that the workload at Stadler's Swiss plants is 'still insufficient' through to mid-2015.

Around half of the workforce is now based outside Switzerland. Stadler has completed construction of 'a high-performance, state-of-the-art' factory in Minsk to serve the CIS markets, and is hoping to enter the Middle East region. Its servicing activities are also growing, with contracts signed in Switzerland, Poland and Sweden and the takeover of Voith Rail Services in the Netherlands. Stadler also sees 'real potential' in the repair sector