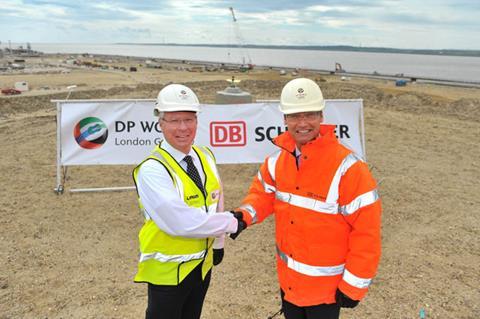 UK: DB Schenker expects to operate four intermodal trains per day from the London Gateway deep-water port when it opens in the fourth quarter of next year. Representing total investment of £1·5bn, London Gateway is being developed by DP World on the site of the former Shellhaven refinery near Stanford-le-Hope in Essex.

In addition to accommodating ships up to five times larger than existing vessels in six deepwater berths, London Gateway will include a 227 ha logistics park as well as 176 ha of container handling space. An initial intermodal terminal comprising six loading sidings and two reception roads is due to be constructed by May 2013; this will be linked to Network Rail’s 7 km branch to Thames Haven Junction on the Tilbury Loop. DP World is funding track renewal, double-tracking and W10 gauge enhancement work on the branch, which is being undertaken by Balfour Beatty.

Passive provision for electrification is included in the upgrading. A second container transhipment facility and a general-purpose rail freight terminal may also be added as traffic volumes grow; all three rail-connected terminals will be open to rail operators on a non-discriminatory basis. DP World expects around 33% of all containers landed at the site will be transported on by rail. Carsten Hinne, Managing Director, Logistics, at DB Schenker Rail (UK) Ltd, noted that this was a higher proportion than is achieved at competing ports such as Antwerpen or Rotterdam.

According to DP World, capacity exists for up to 35 trains per day to serve the port. As Network Rail makes progress in gauge clearance and upgrading on the Felixstowe – Nuneaton corridor, DP World expects Gateway traffic to take over existing paths around London to reach the West Coast Main Line via Barking and Gospel Oak.

‘We are delighted to be involved with the UK’s biggest logistics project as we look to expand our intermodal business’, Hinne said, adding that whilst the service pattern to and from London Gateway was still to be finalised, destinations would be ‘similar’ to DB's existing network of inland terminals. Hinne also suggested that in the longer term, the Gateway could serve as a railhead for non-imported freight for onward distribution by rail either in Britain or in Europe via HS1 and the Channel Tunnel.