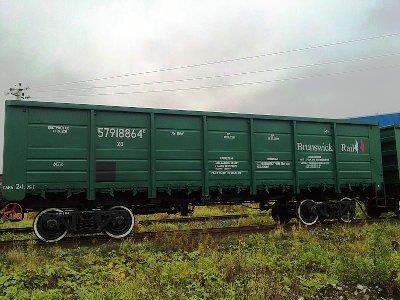 RUSSIA: private wagon leasing group Brunswick Rail announced on October 5 that it had taken delivery of the first of a new design of gondola wagons being supplied by CJSC Promtraktor-Vagon.

Under a contract signed in July, Brunswick Rail is buying 70 Type 12-1304 four-axle wagons from Promtraktor-Vagon; these are fitted with Motion Control System bogies developed by Amsted Rail. The first 10 vehicles were delivered to Kanash in the Chuvashia region on September 30, and the remainder are due to arrive over the next three months.

The first wagons are being leased to TalTEK Trans for the movement of quartzite, coal and ore. The vehicles are expected to enter service this year on an initial 922 km round-trip circuit on the West-Siberian Railway, and they will later be used on longer routes.

The Amsted bogies are designed for a 25 tonne axleload, giving an increased payload of 75 tonnes per vehicle. They are also expected to achieve 500 000 km between overhauls, compared with 200 000 km for traditional Russian bogies.

Following delivery and commissioning tests, the wagons will undertake a series of revenue service trials over the next year as part of a Controlled Operation programme, monitored by representatives from RZD, VNIIZhT, Brunswick Rail, Promtraktor-Vagon, Amsted Rail and other suppliers. These tests are expected to demonstrate the wagon’s improved operational and service characteristics before the start of full-scale commercial production.

‘Bringing new-generation cars to the Russian market is an extremely important and timely step for us’, said Brunswick Rail Deputy CEO & Director of Business Development Vladimir Khoroshilov. ‘Among the main challenges facing the rail industry today is a shortage of wagons, as well as bottlenecks in parts of the network. We are working actively to bring more of these vehicles to the Russian market, offering our customers cutting-edge technology’.