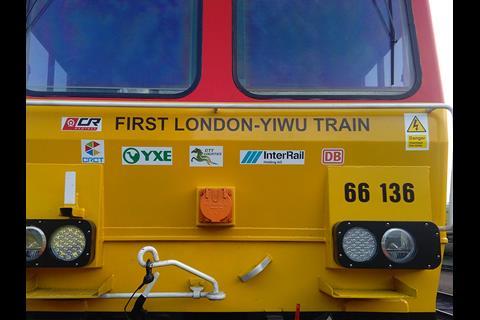 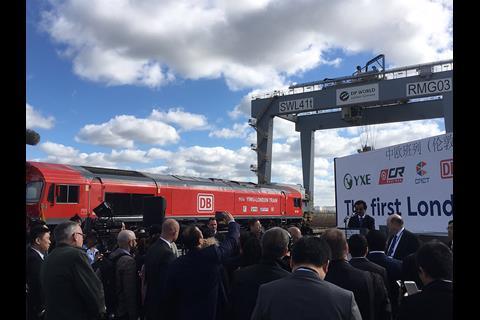 ‘This is the first export train and just the start of a regular direct service between the UK and China,’ said Xubin Feng, Chairman of Yiwu Timex Industrial Investment Co which organised the service. ‘We have great faith in the UK as an export nation and rail provides an excellent alternative for moving large volumes of goods over long distances faster.’

The containers are expected to take three weeks to cover the 12 000 km route via the Channel Tunnel, France, Belgium, Germany, Poland, Belarus, Russia and Kazakhstan to the city of Yiwu in China’s eastern Zhejiang province. The containers will be transhipped from 1 435 mm gauge to 1 520 mm gauge wagons and back at the breaks of gauge at the Poland/Belarus and Kazakhstan/China borders.

The inaugural eastbound train follows on from a westbound demonstration service which had left Yiwu on January 1 and arrived at the London Eurohub terminal in Barking on January 18.

The services have been organised by Yiwu Timex Industrial Investments Co and China Railway Container Transport Corp, as an extension of the established China – Duisburg route introduced in 2015. UK agent One Two Three Logistics handles bookings. DB Cargo is responsible for haulage on the UK and Aachen – Duisburg legs, with Switzerland-based InterRail Group organising haulage through Poland, Belarus, Russia and Kazakhstan.

The service forms part of China's One Belt, One Road programme to create a network of trade routes across Eurasia. The final three containers were loaded onto wagons on April 10 watched by guests including Vice-Governor of Zhejiang province Liming Liang, UK Prime Minister's Business Ambassador for Infrastructure & Transport Rupert Soames and Mayor of Yiwu Shi Wenzhen.

‘This new rail link with China is another boost for Global Britain, following the ancient Silk Road trade route to carry British products around the world’, said Greg Hands, Minister of State in the Department for International Trade. ‘It shows the huge global demand for quality UK goods and is a great step for DP World’s £1·5bn London Gateway Port as it also welcomes its first regular container ships from Asia.’