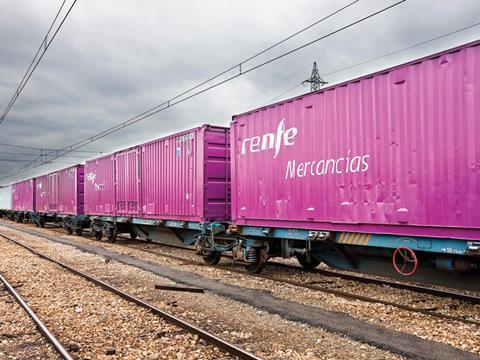 SPAIN: A total of €850∙5m is to be spent on rail projects in 2017-21 under an investment programme to improve land access to ports that was unveiled by Development Minister Íñigo de la Serna on January 9.

Total spending of €1∙42bn is planned for 2016-17, of which €514m will be within port areas and €463∙6m to improve ‘last-mile’ connections between ports and the national rail and road networks. Spending on the national networks will be €440∙8m, of which €250∙8m will be provided from a dedicated fund to improve port access which is also contributing €300∙9m to ‘last-mile’ spending.

Major projects include a new rail connection to the Port of Barcelona at the southern end of the docks complex, costing a total of €149∙8m which is being provided by ADIF (€77∙2m) and the Barcelona port authority (€72∙6m). Using an FGC alignment, ADIF will be responsible for building a single-track electrified connection able to accommodate 1 000 mm, 1 435 mm and 1 668 mm gauge freight trains at a cost of €30∙7m.

Port facilities at La Cabezuela in the Bay of Cádiz are to be connected to the ADIF network by means of 4∙65 km of new infrastructure, which will be the continuation of the short branch to Universidad station from the Sevilla — Cádiz route. The single-track non-electrified line to the port boundary is expected to cost €20m to build.