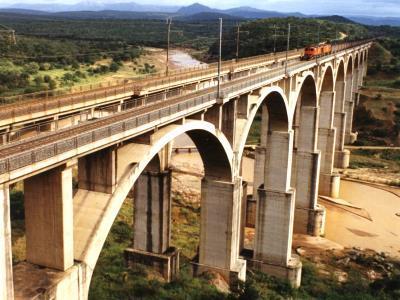 Transnet Freight Rail is expected to invest R10·8bn in the project between 2012-13 and 2018-19, as the first phase of a combined rail and harbour expansion package costed at R27bn in total.

The 1 003 km corridor is to be created by upgrading existing lines, in order to connect the extensive manganese mining complex near Hotazel in Northern Cape province with the Indian Ocean at Ngqura. At present, TFR is able to haul around 5·5 million tonnes a year of export traffic over the route, but this will be raised to 12 mtpa by mid-2017 and eventually to 16 mpta. Track is to be upgraded to accommodate 26 tonne axleloads, while passing loops will be lengthened to take 208-wagon trains; some sections will be double-tracked.

The entire route is already electrified, at 3 kV DC on the northernmost 343 km from Hotazel to Kimberley and 25 kV 50 Hz on the remaining 760 km from Kimberley to Port Elizabeth via De Aar and Cookhouse. Unlike the Richards Bay line where locomotives are changed en route, the new corridor is to be operated with dual-system locomotives.

Meanwhile, TFR Chief Executive Siyabonga Gama told the 12th Coaltrans Southern Africa conference in May that Botswana’s Mmamabula coalfields would be linked to the Richards Bay line within seven years. Feasibility studies are underway for a cross-border link which will connect the area with TFR’s existing branch to Lephalale, in South Africa’s developing Waterberg coalfield. Trains would then run via Thabazimbi and north of the Gauteng region to reach the Coallink corridor at Ogies in Mpumalanga province.

TFR recently began running three 35-wagon coal trains a week from Botswana to Durban, using its existing line via Gauteng, of which two are formed from TFR wagons and one uses Botswanan rolling stock. Traffic is expected to increase to six trains per week by September.

According to TFR, a record 69·2 million tonnes of coal was carried on the Richards Bay corridor in the financial year to March 31 2013. Capacity on the route is due to be expanded to 95 mtpa by 2018, with a short-term target of 81 mtpa. Construction of a link to the Swaziland rail network will allow non-coal traffic to be diverted off the coal line in order to release additional capacity. The route was closed between May 14 and 25 for heavy maintenance work on key sections, including the busy single-track section at Overvaal.