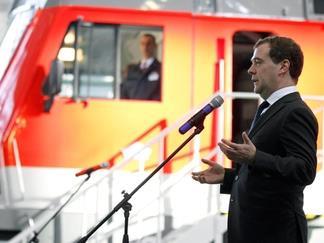 RUSSIA: The first series-produced EP20 passenger locomotive was handed over to Russian Railways by manufacturer Transmashholding at a ceremony near Rostov on November 30.

The first Russian electric locomotive design capable of hauling inter-city trains at up to 200 km/h, the EP20 is a single-section Bo-Bo-Bo passenger locomotive designed for dual system operation from 25 kV AC and 3 kV DC power supplies. RZD is taking delivery of a fleet of 200 locomotives from TMH for express passenger services. RZD expects to take delivery of three EP20 locos per month to the end of 2013; they will initially be deployed on the Moscow – Sochi route ahead of the Olympic Winter Games, which the Black Sea resort is hosting in 2014.

The EP20 is the first fruit of the TRTrans industrial design partnership between TMH and Alstom, which holds a 25% stake in the Russian group. The TRTrans design centre at TMH’s Novocherkassk plant in Rostov region is developing a range of locomotives for the Russian market, all of which would be equipped with asynchronous traction drives.

Next to market is likely to be the 2ES5 twin-section freight locomotive, a pre-series demonstrator having already been built. RZD has placed an order for 200 locomotives with TMH.