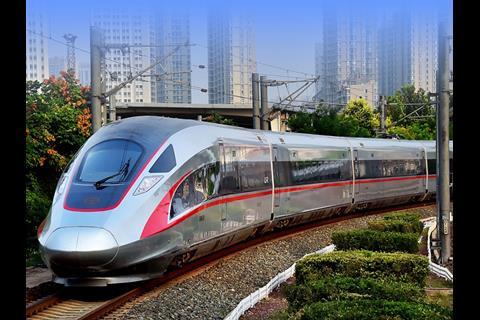 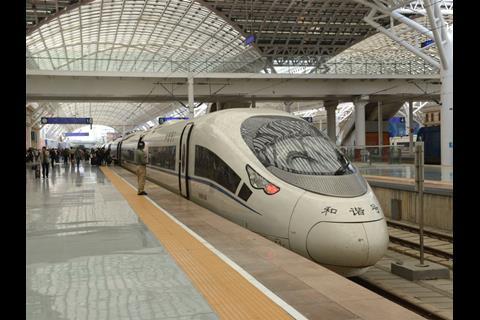 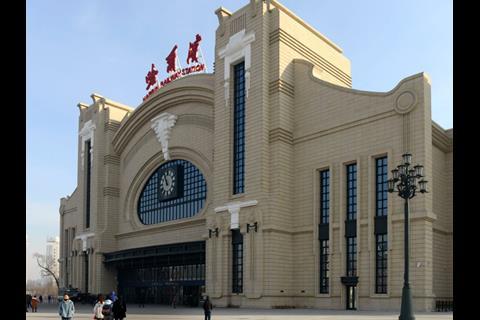 First to open on December 25 was the 293 km Harbin – Mudanjiang Intercity Railway, running southeast from the capital of Heilongjiang province to a major city close to the Russian border with a population of 2·5 million inhabitants. Authorised in 2014 at a cost of 33·6bn yuan, the line has been built for 250 km/h operation. It includes 109 bridges and viaducts totalling 103 route-km and 39 tunnels accounting for a further 69 km, leaving 121 km at grade.

Intermediate stations have been built at Xin Xiangfang Bei, Acheng Bei, Mao'ershan Xi, Shangzhi Nan, Yimianpo Bei, Weihe Xi, Yabuli Xi, Hengdao Hezi Xi, and Hailin Bei; a further station at Mudanjiang Xi is expected to open in the summer. As part of the project, the existing main stations at Harbin and Mundanjiang have been remodelled and extended. Journey times between the two cities have been cut from 4 h 30 min to 90 min by the fastest non-stop services. In the longer term, plans are being discussed for a 380 km cross-border extension to Vladivostok.

Also opened on December 25, the 287 km Hangzhou – Huangshan Passenger-Dedicated Line forms the eastern section of the Hangzhou – Nanchang high speed axis, which is due to be completed throughout by 2022. This route has intermediate stations at Hangzhou Dong, Hangzhou Xi, Fuyang, Tonglu, Jiande, Qiandaohu, Sanyang, Jixi, Shexian and Huangshan Bei. The biggest engineering works included the 12 km Tianmushan tunnel and the 4·1 km Shinuishan tunnel as well as the 2·3 km Chuanfang viaduct.

Designed for 250 km/h operation, the line is initially provided with 11 trains each way per day, offering a fastest end to end journey time of 1 h 43 min. The line is expected to provide a boost to regional tourism, as Huangshan is one of China's four ‘sacred mountains’, while nearby towns such as Qiandaohu have become tourist destinations in their own right.

December 26 saw the long-awaited opening of the 350 km/h Jinan – Qingdao trunk line, which boosted capacity on the important corridor connecting the two principal cities in Shandong province. Forming part of the national ’10 x 10’ high speed grid, the 307·8 km line is connected to the Beijing – Shanghai route at Jinan, this line allows travellers from those two cities to reach Qingdao entirely on 350 km/h routes, apart from a short section between Jiaozhou Bei and Hongdao which is restricted to 250 km/h.

Under construction since December 2015 at a cost of 59·9bn yuan, the line runs almost entirely on viaduct, with 87% of the route elevated. The fastest timing between Jinan and Qingdao has been reduced to 1 h 40 min, almost an hour faster than the best achieved by high speed trains using the upgraded conventional route.

Intermediate stations have been provided at Jinan Dong, Zhangqiu Bei, Zouping, Zibo Bei, Linzi Bei, Qingzhou Bei, Weifang Bei, Gaomi Bei, Jiaozhou Bei and Hongdao. A 7·5 km tunnel takes the line under Qingdao Airport, where an underground station has been provided. Rather than running into the city’s main station, most trains terminate at the Qingdao Bei high speed hub, where connections are provided to the growing metro network.

The same day saw the opening of a new coastal line running south from Qingdao Bei to Yancheng in Jiangsu province. This 428·8 km route with 15 stations is initially served by two daily EMUs in each direction, the faster taking 3 h 5 min to complete the journey at an average speed of 139 km/h including stops.

December 26 also saw the start of revenue operation on the 318 km Huaihua – Hengyang railway in Hunan province, which had been formally inaugurated on the previous day. Another 200 km/h mixed-traffic line with 16 stations, this line had been under construction since June 2014. It required 41 tunnels and 243 bridges totalling 57% of the route length. As well as the 17 km Liangshan tunnel, major bores include the Jianfengshan (6 406 m), Xiangjiashan (4 014 m) and Baishiwan (3 788 m) tunnels.

Meanwhile, the National Development & Reform Commission has approved the construction of a 292 km high speed line between Xi'an and Yan'an in Shaanxi province. Budgeted at 55·2bn yuan, the line is expected to open in 2023.