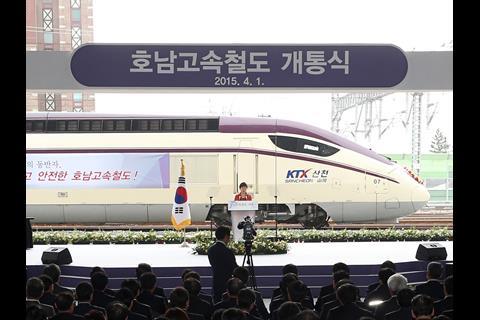 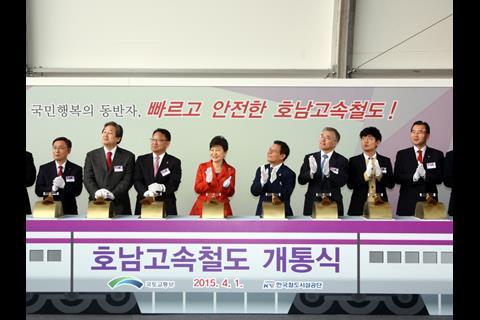 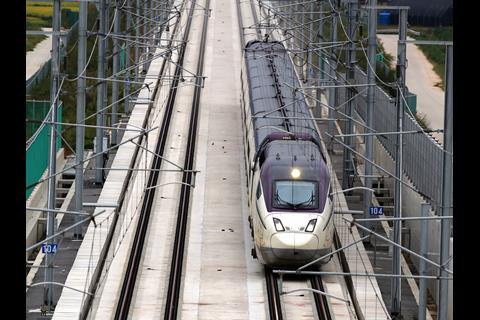 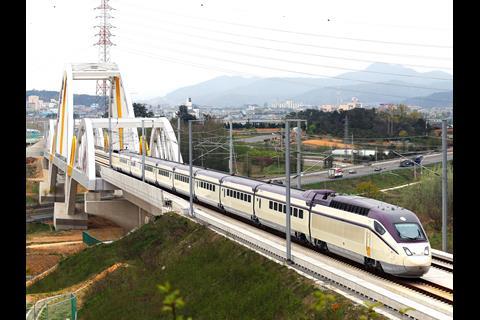 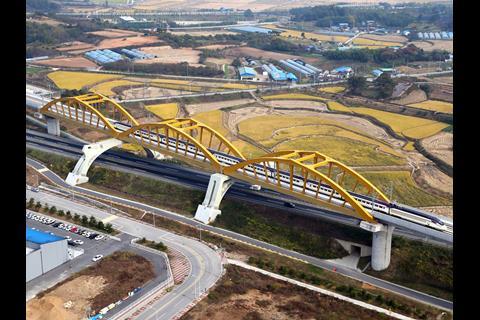 SOUTH KOREA: The 182·3 km Honam High Speed Railway serving the southwest of the country was formally opened by President Park Geun-hye in a ceremony at Gwangju Songjeong station on April 1, attended by many VIPs and invited guests, including the heads of Korea Rail Network Authority and national operator Korail.

Developed by KR over the past five years, the new line diverges from the existing Seoul – Busan high speed line at Osong, where the station opened in 2010 has been expanded, and serves new stations at Gongju, Iksan, Jeongeup, and Gwangju Songjeong. The total construction cost is put at around 8 350bn won, which was funded by the national government.

Korail is due to start revenue KTX services over the new line on April 2, cutting the fastest journey times between Seoul and Gwangju from 2 h 40 min to just 90 min. Tickets for the new services have been on sale since March 13.

The operator is currently taking delivery of 22 new trainsets for the route; these are an enhanced version of Hyundai Rotem's KTX-Sancheon design, and incorporate 91% local content. The first trainset arrived in October 2014, and five by the end of the year. A further three sets were delivered in March and the remainder will enter service over the next few months.

Each unit is formed of two power cars and eight trailers. There are seven standard cars offering 377 seats in 2+2 and one first-class car with 33 seats arranged 2+1; this offers a 13% increase in capacity compared with the 363 seats of the earlier units. Each seat has a power outlet, and a 4G modem is provided to boost onboard wi-fi connectivity.

The Honam HSR is intended to bring the province of Jeollanam-do in to what the government calls the ‘half-day life zone’, where return business trip between Gwangju and Seoul can be achieved in half a day, and daily commuting to the capital becomes possible. According to the Korea Transport Institute, the average commuting time in the Seoul metropolitan area is now 76 min, following the development of satellite cities like Gwacheon, Anyang, Gwangmyeong and Goyang. KR suggests that this makes the 93 min trip competitive for daily commuting.

The line is projected to generate economic benefits totalling 25·2tr won, of which 21tr comes from increased production and 4·2tr in wages, through the generation of 172 000 new jobs. The Chungcheongnam-do region around Osong and the Innovation Cities and Enterprise Cities initiatives in the Honam region are expected to stimulate local development and enhance the urban infrastructure, with new logistics hubs springing up around the KTX stations, according to KR.

Osong has already become a leading centre for the biotech industry, including the Osong BioHealth Science Technopolis and a high-tech medical complex, and KR believes the opening of the Honam HSR will trigger further development around the station. It points out that the city of Daejeon grew into today’s metropolis because of its position as a key junction on the conventional rail network. The new line is also expected to accelerate the development of the area around Gwangju Songjeong station, which ‘has felt the effects of a sluggish economy’.