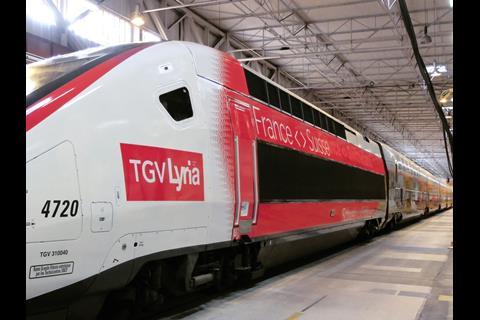 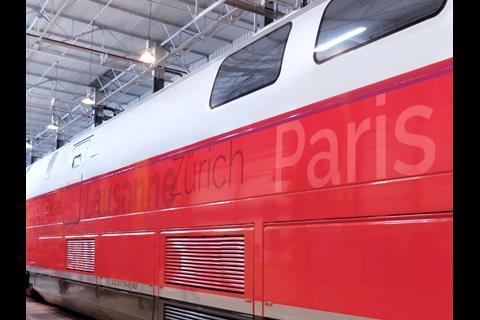 EUROPE: Franco-Swiss high speed operator TGV-Lyria has unveiled the first of 15 multi-system Euroduplex trainsets which are destined to operate all Lyria services from the December 15 2019 timetable change.

Being repainted into a predominantly red livery at the PSA works in Rouen, at a rate of two or three per month, the 510-seat double-deck trainsets will replace the operator’s current single-deck TGVs which carry a maximum of 316 passengers.

According to the newly-appointed Director of TGV-Lyria Fabien Soulet, the reliveried trains will be continue to be deployed on SNCF domestic services in France for the next few months, pending interior refurbishment which is scheduled to be completed at the rate of one train per month from September. In line with the enhanced service introduced in December 2017, the refurbished Euroduplex sets will offer three classes: Business Premier, Standard Premier and Standard.

Under the enhanced timetable to be introduced in December, TGV-Lyria will run up to eight trains/day linking Paris-Lyon and Genève in 3 h 8 min, and up to six per day from Paris-Lyon to Basel in 3 h 3 min, of which five will continue to Zürich and one to Bern. There will also be three Paris – Neuchâtel trains per day, plus one Genève – Lyon – Marseille service offering an end-to-end journey time of 3 h 30 min.

‘2019 will be marked by major innovations in order to improve our customers’ journey experience and strengthen our positioning’, said Soulet. ‘We are in effect the only operator in this market to be able to offer a journey that combines comfort, flexibility and speed – with journey times of between 3 h and 4 h – which respects the environment. I am leading many innovations with a very clear objective: to make TGV-Lyria the preferred carrier for travellers between France and Switzerland.’