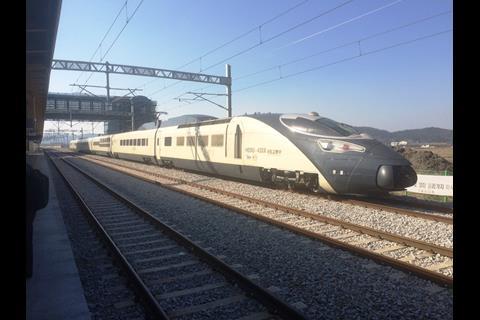 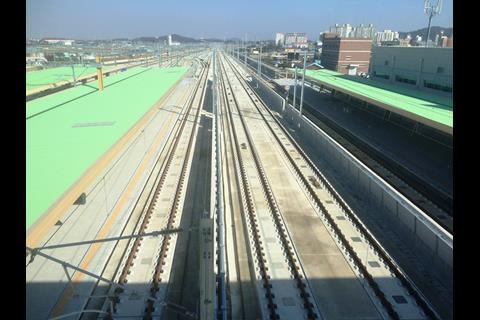 SOUTH KOREA: National train operator Korail has begun trial running on the first phase of the Honam high speed line, which is now expected to open for revenue service in April.

Intended to serve the southwest of the country, Phase I of the country’s second high speed line has been under construction since 2009 at an estimated total cost of 8·7tr won including rolling stock.

Diverging at Osong from the Gyeongbu high speed line which links Seoul and Busan, the first section of the Honam high speed line runs for 182 km to Gwangju-Songjeong, serving intermediate stations at Gongju, Iksan and Jeongeup.

Unlike the current Gwangju station, which lies on a branch off the main line, Songjeong station is located southwest of the city ready for extension of the high speed line to Mokpo. However, infrastructure manager KRNA has not indicated any timescale for construction of this final 49 km, which means that for now the high speed trains will continue to serve Mokpo over the existing line.

The new line has been designed for 350 km/h operation, although trains will initially run at 300 km/h. This compares with a maximum of 200 km/h on the conventional Honam line between Daejong, Gwangju and Mokpo. Services will be operated by a new build of KTX-Sancheon 10-car trainsets built by Hyundai-Rotem.

Opening of the high speed line is expected to cut the fastest journey time between Seoul’s Yongsan station and Gwangju from 2 h 30 min to 1 h 33 min.

There have been some complaints that the new line runs direct from Iksan to Osong, which means that KTX trains to and from the capital will no longer serve Daejong. According to Korail, sending the high speed trains via the current route through Seodaejong to join the Gyeongbu line would add around 45 min to journey times. Local trains will continue to link Gwangju and Daejeon via the existing line.

From 2016, the Honam high speed line is also due to be served by rival operator SR, which has been granted the concession to run the new high speed line from Suseo in the southeast of the Seoul conurbation to join the Gyeongbu high speed line at Hyangnam, north of Cheonan-Asan. SR plans to run direct services from Suseo to both Busan and Mokpo in competition with Korail’s trains from Seoul and Yongsan.