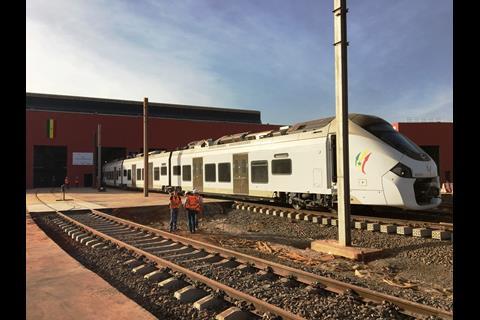 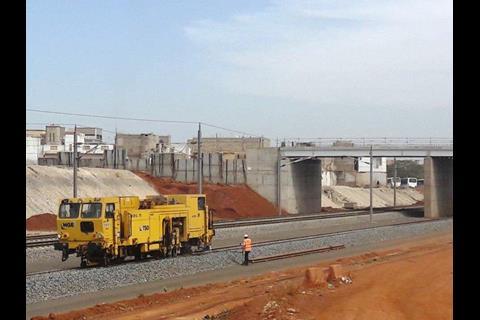 SENEGAL: President Macky Sall was among the invited guests who joined the first test run of an Alstom Coradia Polyvalent multiple-unit in Senegal on January 14.

The train’s first run marks a further step in preparations for the opening of the 55 km Train Express Régional rail link between the capital Dakar and a new international airport at Diass. The 1 435 mm gauge line is expected to open in two stages, with the first passenger trains planned to run later this year. An initial 36 km will link a station in central Dakar with the new town of Diamniadio.

A second phase of 19 km would extend the route to the Blaise Diagne airport. The completed line would have 14 intermediate stations and the fastest end-to-end journeys will take 45 min. The railway is expected to carry 115 000 passengers/day.

Alstom is supplying 15 electro-diesel Coradia Polyvalent trainsets for the route, of which three have now arrived in Dakar. These were ordered in 2016 under a contract placed by government-owned investment agency APIX. The four-car trains can carry up to 400 passengers in first and second class saloons and have a maximum speed of 160 km/h.

The trains are being produced at Alstom’s Reichshoffen plant in France; components come from factories at Le Creusot (bogies), Ornans (traction equipment) and Villeurbanne (information systems). The design is adapted for local conditions, including provision of a high-performance air conditioning unit. The use of electro-diesel trainsets would allow ‘continuous operation of the train and more reliability for a better passenger experience’, an Alstom spokesperson told Railway Gazette.

Contracts for the civil works were let in 2016. A consortium of France’s Eiffage, local company CSE and Yapı Merkezi of Turkey was awarded a construction package worth CFAFr330bn. Energy services company Engie and subcontractor Thales supported by CSE were selected as preferred bidders for a €225m design and build contract covering the power supplies, 25 kV electrification, signalling, train control and telecoms.

A consortium of TSO, NGE Contracting, CIM and CDE has been tasked with rebuilding and realigning the legacy metre-gauge railway into Dakar as part of the TER programme.

‘Thanks to the confidence of our customer APIX and the contribution of all Alstom employees, we are proud to place Dakar among the first cities in Africa to acquire such transport technology and thus provide passengers in this country with a safe, reliable and environmentally friendly mobility solution’, commented Raphaël Bernardelli, Managing Director for Alstom in Africa.