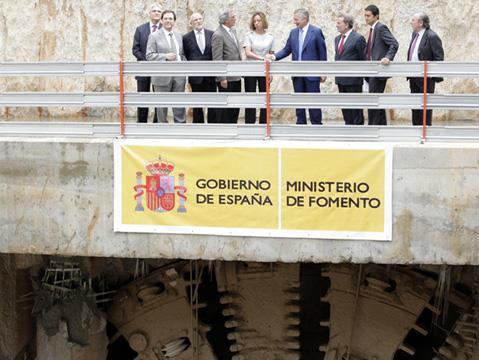 SPAIN: Development Minister José Blanco visited Barcelona on July 26 to mark completion of the tunnel that will carry high speed trains under the city centre between Sants and La Sagrera.

The 2 300 tonne earth pressure balance TBM 'Barcino' reached an extraction shaft located at the intersection of Provença and Entença streets, having begun its 5·1 km drive from La Sagrera on March 26 2010.

With a total length of 5·8 km, the tunnel between Sants and La Sagrera stations is one of the last sections remaining to be completed on the high speed line between Barcelona and the French border, which the ministry expects to put into service in 2012.

The tunnel has cost over €179·3m to build, including extensive measures to protect historic buildings such as Gaudí's Sagrada Familia from any settlement. Work has been guided by an advisory committee whose 21 members from around the world have provided expertise in geology, civil engineering and other disciplines. The city and regional authorities also worked closely with ADIF on the project.