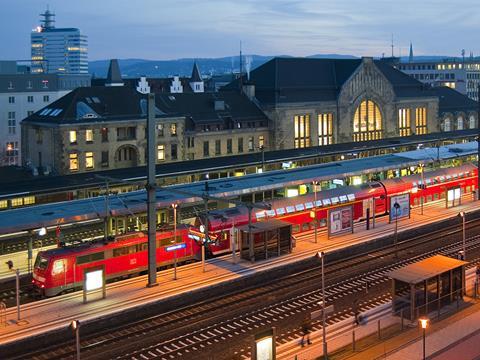 GERMANY: Commissioner for Rail and Parliamentary Secretary of State for Transport & Digital Infrastructure Enak Ferlemann has said that a new 300 km/h line needs to be built between Bielefeld and Hannover.

Speaking to Deutsche Presse Agentur on March 18, Ferlemann said that the new line was required to cut the trip time between Köln and Berlin to under 4 h in order to meet the criteria for the proposed national regular-interval timetable known as Deutschlandtakt.

The proposal surfaced in October last year when the government announced its Zukunftsbündnis Schiene programme, at the heart of which lies the Deutschlandtakt. The intention then was to rebuild the existing 177 km route for 300 km/h, together with similar enhancements to the Wolfsburg – Berlin section of the Köln – Berlin corridor, but in practice it seems that only a new line will achieve the desired result.

In the 2030 Federal Transport Infrastructure Plan the Bielefeld – Hannover project has priority status and includes plans for two extra tracks to be laid between Seelze and Porta Westfalica for a maximum speed of 230 km/h, plus upgrading of two of the four tracks from Porta Westfalica to Bad Oeynhausen and Löhne for 180 km/h.

This is no longer considered adequate, and Ferlemann envisages that plans for a 300 km/h route will be progressed rapidly this year so that detailed consultation with local residents and other interested parties about a preferred alignment can start next year. He said that ‘all practical variants must be examined’, including upgrading of the existing line, ‘which will probably not suffice’. The current preference is for a line following the A2 motorway, another option being an alignment close to the Mittellandkanal.

Citing the doubling of rail traffic on the Berlin – München corridor after the opening of the Erfurt – Ebensfeld high speed line in December 2017, Ferlemann said that more passengers could be won from air to the fast and environmentally friendly rail mode. Not only that, but a new Bielefeld – Hannover line would permit a half-hourly regular-interval service, which was ‘a dream for the entire region’.