Broad gauge for Pajares base tunnel 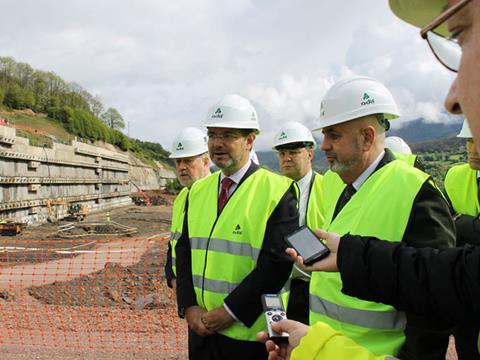 SPAIN: The new alignment between La Robla and Pola de Lena which includes the 25 km Pajares base tunnel is to open with track laid to 1 668 mm gauge, Secretary of State for Infrastructure, Transport & Housing Rafael Catalá announced during a site visit on May 17. Tenders are to be called during July for tracklaying with sleepers enabling subsequent conversion to 1 435 mm gauge, as well as for electrification at 25 kV AC.

The new alignment is 49⋅7 km long and will cut the distance by rail between León and Oviedo by 33 km, offering the prospect of a Madrid – Oviedo journey time of around 3 h 15 min. Opening the route to 1 668 mm gauge would ensure it was not isolated from the conventional network, and avoid the operational complexity of using gauge-changing equipment at both ends.

The Ministry of Development says that this will enable ‘more rational’ deployment of rolling stock and ensure that freight can continue to use the León – Oviedo route, where traffic is currently running at 182 trains a week.

Conversion of new alignment to 1 435 mm gauge could be completed in less than a month, according to the ministry. At its southern end it will eventually connect with the high speed route currently under construction between Valladolid and León, where a PPP contract to undertake tracklaying, electrification and signalling is due to go out to tender at the end of September.