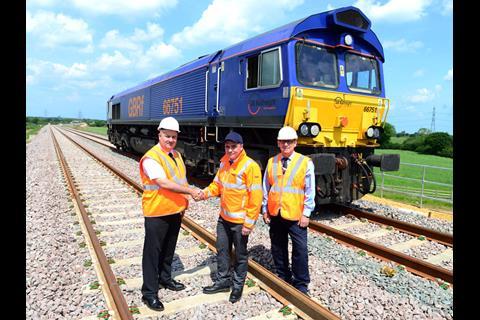 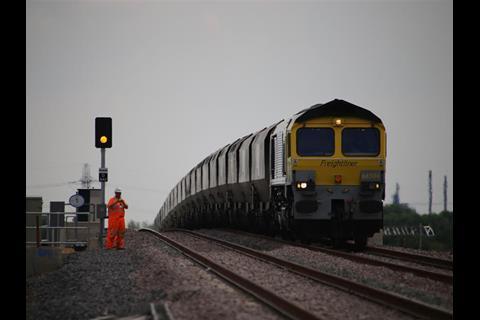 The grade separation project is designed to eliminate the need for slow-moving bulk freight trains from the Humber ports to use the ECML for 14 km. By removing a major pinch point it is expected to increase capacity and improve the reliability of passenger services.

The chord was built by Morgan Sindall at cost of £45m, and forms part of a £600m package of projects being undertaken by infrastructure manager Network Rail to boost ECML capacity. These include a flyover to separate passenger trains at Hitchin, which opened last year, and upgrading of the Peterborough – Lincoln – Doncaster route for use by more freight trains.

‘We welcome the opening of the Doncaster North Chord as an important new addition to Network Rail’s infrastructure’, said Martin Wilks, Director of Coal Services at Freightliner Heavy Haul. ‘This is an important project which gives freight trains a clear run towards the power stations, without incurring the performance risk of crossing the busy East Coast Main Line, and will improve the service we can offer to our customers.’

John Smith, Managing Director of GB Railfreight, said the chord was ‘a great example of a new government infrastructure project that brings benefits to both the freight and passenger industries, improving capacity on the East Coast Main Line as well as trans-Pennine links between ports and power stations in the region.’