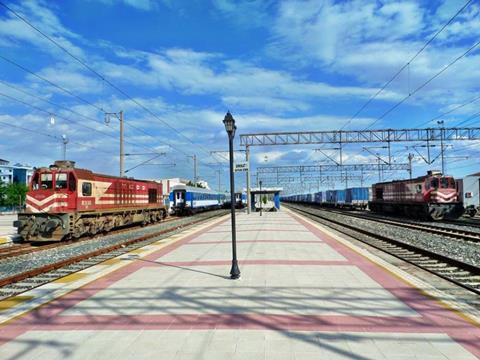 TURKEY: A €275m grant to support the €1bn modernisation of the 233 km line from Istanbul to the Bulgarian border at Kapıkule was signed by representatives of the European Union and Turkey on February 28.

The route is designated as being of European significance because it links to the core trans-European network. Under the upgrading programme, the electrified mixed traffic line is to be double-tracked and equipped with ETCS Level 1 to allow trains to operate at up to 200 km/h.

In November a consortium of Alsim Alarko and Gulermak Agir Sanayi was awarded a €530m contract to modernise the 189 km Cerkezkoy – Kapıkule section of the route, including the renovation of five stations, six viaducts, 24 other bridges, two bored tunnels and seven cut-and-cover tunnels. This is scheduled to be completed by April 2022.

As part of its discussions with the EU, Turkey has also pledged to begin construction of the planned Europe – Asia rail link via the Yavuz Sultan Selim Bridge across the Bosporus by 2029 at the latest. The third bridge across the strait opened to road traffic in August 2016, and has provision for double-track railway which could provide a freight route bypassing central Istanbul. This in turn would help to develop rail freight traffic between the EU and Turkey, the Middle East, Caucasus and Central Asia. Routes for the required connecting lines have not yet been finalised.

Meanwhile, the Marmaray suburban railway project which has been under construction since 2004 is nearing completion. An initial short-distance commuter service through the Marmaray tunnel began in 2013, and Minister for Transport & Infrastructure Cahit Turhan recently announced that suburban services on the full 76·6 km Halkali – Gebze route are to be launched in the first week of March.

He did not give a date for the start of high speed passenger services from Asia to Halkali via the Marmaray tunnel, or for the start of freight services, but previous official announcements have suggested high speed trains could begin running a few months after the launch of the suburban service.