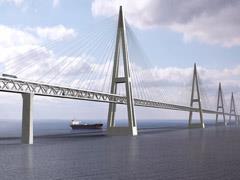 EUROPE: Femern A/S is recommending an immersed tunnel rather than a cable-stayed bridge as its preferred option for the Fehmarn Belt fixed link to replace the train ferry between Germany and Denmark, the Danish project promoter announced on November 30.

A 17·6 km tunnel up to 40 m deep would present fewer construction risks as it would not be pushing the limits of the technology to the same extent as a cable-stayed bridge, which would need free spans of 724 m, the largest ever built for combined road and rail use.

Financially, there is little difference. A bridge design by Cowi/Obermeyer is costed at €5·2bn, and Rambøll/Arup/TEC’s tunnel plan at €5·5bn, with the tunnel having slightly higher operating costs and taking around six months longer to build, at 6½ years.

The studies were commissioned to update 1999 reports which had backed a bridge. The final decision will be taken by the Danish government in early 2011, with contracts to be awarded in 2014 for opening in 2020.