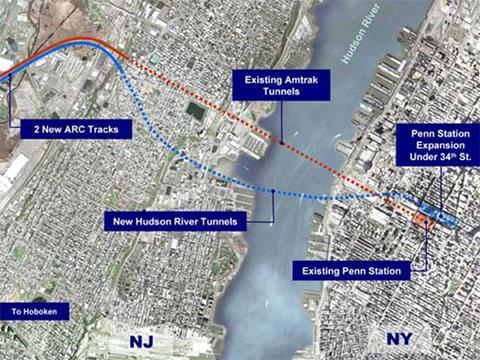 USA: Amtrak has proposed accelerating its Gateway Project as a replacement for the cancelled Access to the Region's Core trans-Hudson rail tunnel to increase capacity into Midtown Manhattan.

Amtrak's plan would incorporate elements from ARC, including the 14·5 km route, a new and expanded Portal Bridge over the Hackensack River and the now-abandoned civil works in New Jersey. However, instead of terminating at an expensive station deep under Midtown, Amtrak envisages routing trains into an expanded Pennsylvania Station.

As with ARC, most of the new capacity would be given to New Jersey Transit; of the 21 trains per hour the new tunnel could handle, 13 would be commuter services and the remainder to inter-city services.

Amtrak's proposal had been outlined prior to the cancellation of ARC and was intended to supplement it, but the project is now being accelerated by at least 10 years and refined in an effort to have it finished within a decade. New Jersey's senators are actively sponsoring the project in the hope of picking up much of the federal funding that was earmarked for ARC until it was rejected by New Jersey Governor Chris Christie in October.

Amtrak plans to spend $50m to begin preliminary engineering and design work, which would take four years. The project cost is currently estimated at $13·5bn, compared to $8·7bn for ARC, although Christie predicted the latter's price tag would have been much higher.