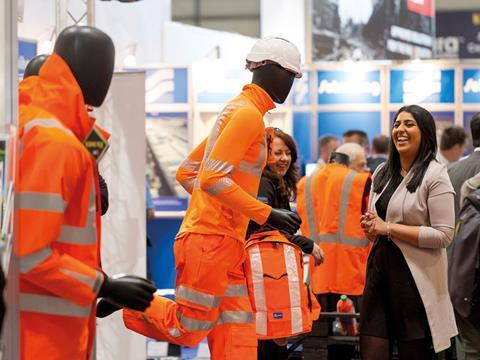 More than 200 companies from across Europe will be participating in the Infrarail 2018 exhibition taking place at London’s Excel conference centre on May 1-3. According to organiser Mack Brooks Exhibitions, the 12th biennial infrastructure fair is expected to be ‘one of the biggest in recent years’, with attendance predicted to top the 5 300 visitors recorded in 2016.

Infrastructure spending in the UK is set to continue at a high rate over the coming few years, with the Department for Transport proposing an increase in expenditure on infrastructure maintenance and renewals during Network Rail’s five-year regulatory Control Period 6 starting on April 1 2019. Work is continuing on major projects carried over from CP5, including the Great Western and North Western electrification programmes, the second phase of the Edinburgh – Glasgow Improvement Project in Scotland and the Great North Rail Project to upgrade the Trans-Pennine corridor linking Liverpool, Manchester, Leeds and York.

In March, Secretary of State for Transport Chris Grayling unveiled the Rail Network Enhancements Pipeline which will set the overall strategy for future investment and enhancement projects, both publicly and privately funded. And on top of Network Rail spending, construction work is starting on the first phase of High Speed 2 linking the southeast and West Midlands, while planning is underway for East West Rail in the Oxford – Milton Keynes – Cambridge corridor.

Infrarail 2018 is due to be opened on May 1 by Network Rail Chief Engineer Jon Shaw, who has held a variety of roles across both the infrastructure and rolling stock industries; he will be joined for an opening panel discussion by Railway Industry Association Chief Executive Darren Caplan and Mack Brooks Chairman Stephen Brooks.

Alongside the exhibition will be a programme of CPD-certified technical seminars and project updates intended to ‘educate and inspire’ those working in the industry. Many of these will take place in the Knowledge Hub organised in association with RIA. The Rail Alliance will be promoting its members’ products and services in its own Hub, while the CITE Hub will focus on related civil engineering and geotechnical issues.

A broad spectrum of companies across the supply sector will be showing a range of infrastructure related equipment from track and signalling components through drainage and platform surfaces to cabling, power tools and workwear. Staffing, recruitment and training organisations will also be represented, along with many different support services such as plant hire. Rail manufacturer British Steel will once again be sponsoring a track display area where components and equipment can be presented in ‘an authentic setting’.

Other organisations exhibiting at Infrarail include HS2 Ltd and the Rail Supply Group, along with the Permanent Way Institution, the supplier qualification scheme Risqs and the infrastructure sustainability rating programme Ceequal. International exhibitors include Rail Baltica, promoting opportunities to support the development of its trans-European corridor.