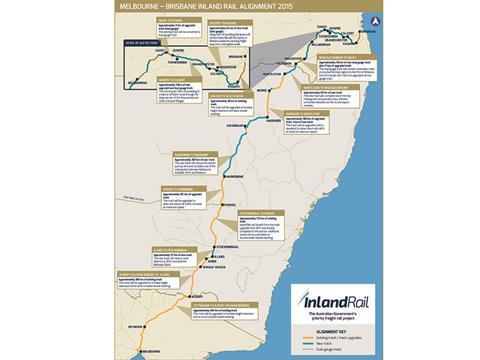 AUSTRALIA: The federal government has called tenders for a contract to provide major technical advisory and engineering services for the proposed Melbourne – Brisbane Inland Rail project, and a briefing session is to be held in Brisbane on November 13.

In parallel, Infrastructure Australia is considering the business case to inform funding decisions for construction of the line.

‘Inland Rail is now very much in the planning and environmental approvals phase,’ said Deputy Prime Minister and Minister for Infrastructure & Regional Development Warren Truss on October 31. ‘The company that is chosen to deliver technical advisory and engineering services for Inland Rail will provide a team of experts to guide the engineering requirements for the project. This will allow Australian Rail Track Corp to get on with the job that I've charged them with—getting Inland Rail shovel ready.’

The proposed 1 700km corridor linking Melbourne and Brisbane would require a total of 600 km of new line, as well as extensive upgrading. It would cut the end-to-end distance by 200 km and enable freight trains to bypass the congested network around Sydney.

Truss said freight movements along this corridor are expected to treble over the next two decades. It is envisaged that the line would initially carry 1 800 m double-stack container trains, with 3 600 m trains planned for the longer term.

‘The new freight line will reduce transit time between Melbourne and Brisbane by more than 10 h, cutting the journey to less than a day’, said Truss. ‘It will remove 200 000 trucks, or 5·4 billion net tonne-km of freight, from roads each year and add A$22·5bn to the Australian economy. The project itself will create up to 16 000 direct jobs during a 10-year construction period and a regular 600 jobs once operational.’