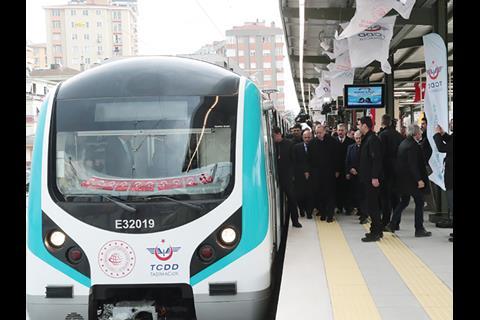 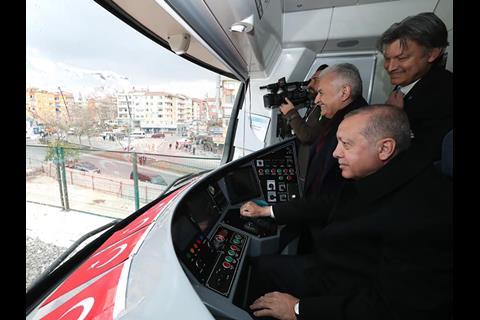 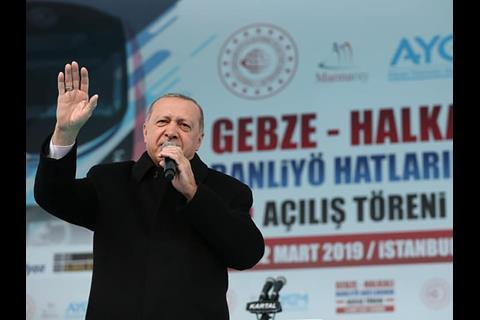 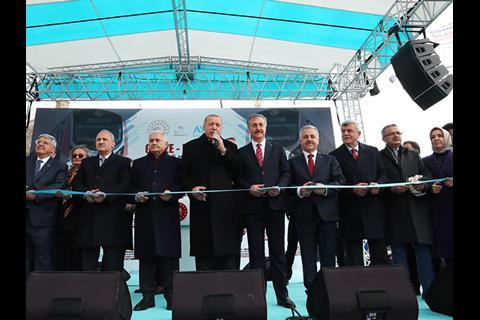 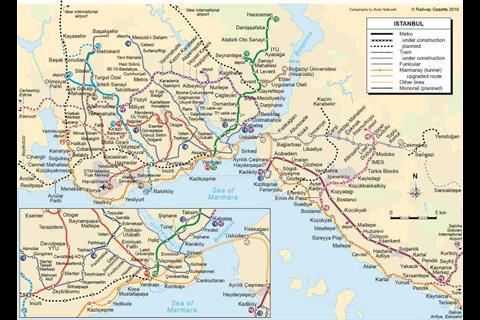 The President rode an inaugural train from the opening ceremony at Kartal on the Asian side of the route east as far as Gebze, where suburban services terminate. Speaking at the ceremony, Erdoğan said the suburban services were expected to carry up to 75 000 passengers/h or around 1·7 million passengers/day. He added that the inclusion of a third track along the corridor for use by long distance trains offered a rail route between London and Beijing.

The suburban services are operated using Hyundai Rotem Class E32000 EMUs ordered in 2008. These run at a maximum speed of 100 km/h with a commercial speed of 45 km/h, with 2 min to 10 min headways. There are 43 stations, and the end-to-end journey time is around 1 h 10 min.

With the opening of the corridor, high speed services from Ankara will no longer terminate at Pendik, but will use Marmaray’s third track to call at Gebze, Pendik, Maltepe, Bostancı and Soğutluçesme on the Asian side and Bakırköy and Halkalı on the European side.

No mention was made of the historic waterside Haydarpaşa terminus, where remodelling ahead of an anticipated reopening for high speed services has been delayed by the discovery of substantial archaeological remains.

Work on the Marmaray link began in 2004 with the construction of the immersed tube tunnel under the Bosporus.

TCCD’s suburban services from Halkalı to Sirkeci on the European side and Gebze to Haydarpaşa on the Asian side ceased in March 2013, ahead of the launch of a shuttle service through the tunnel between Yenikapi, Sirkeci and Üsküdar in October of that year. This initial operating section was later expanded to 13 km and five stations.

Completion of the remainder of the route was repeatedly delayed by various factors including disputes over the cost of construction, the discovery of archaeological remains and problems with road crossings.

The first tender for construction works for the suburban line was awarded in 2007 to a consortium of Alstom, Marubeni and Turkey's Dogus for US$815m, but was cancelled after the consortium pulled out citing increased costs. A second tender in 2011 was won by a 70:30 consortium of Spain's OHL and Invensys Rail Dimetronic for US$933m, but was suspended in mid-2014 with the consortium again complaining that the cost of the work far exceeded the agreed fee.

Work restarted in 2016, but suffered repeated delays pushing back the completion date to the end of 2018, and finally March 2019.