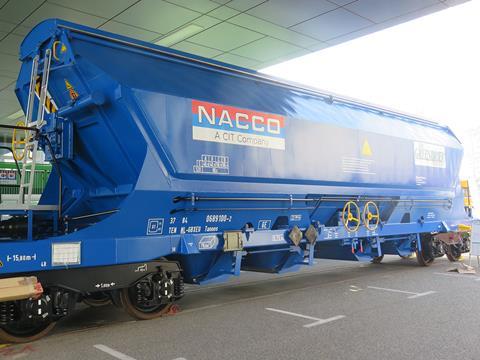 GERMANY: An agreement has been signed for a consortium of leasing company Wascosa and Hamburg-based investor Aves One to buy about 30% of Nacco Group’s wagon leasing activities and assets. This one of the steps required for regulatory approval of VTG’s planned acquisition of the remainder of Nacco.

Under the agreement signed on August 13, Wascosa is to take over Nacco’s operational activities in Germany and Luxembourg, including the workforce and leasing agreements, while Hamburg-based investor Aves One will buy around 4 400 wagons.

VTG announced plans for the acquisition of CIT Group Inc’s European business Nacco in July 2017. The German and Austrian competition authorities granted conditional regulatory approval earlier this year, subject to around 30% of the Nacco business first being sold to third party.

VTG said the assets being divested had been offered to a large number of prospective purchasers before the deal with Wascosa and Aves One was agreed.

‘We are satisfied with the sale process and the result, despite the long waiting time’, said VTG CEO Heiko Fischer. ‘Having reached this milestone, we can now move on with full vigour to the final preparations for the closing of the acquisition and the subsequent integration.’