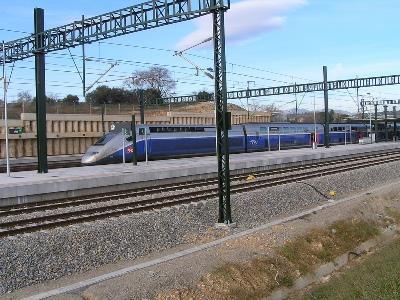 EUROPE: Ceremonies were held at the Franco-Spanish border on January 27 to mark the official inauguration of the 44·5 km cross-border rail link between Perpignan and Figueres. The 1 435 mm gauge line has been open to passenger and freight services since December 19.

Pointing out that 'this link between the two main high speed rail European networks overcomes a historic barrier', Secchi said 'the new cross-border section represents a major achievement for the internal market and for the mobility of citizens. I am proud the European Union played such an essential role in making this possible.' The EU provided co-financing of €69·75m from its Trans-European Transport Network budget, representing 25% of the cost of the project.

Including the 8 km Pertus tunnel, the cross-border route built by the TP Ferro concession group is equipped with ETCS Level 2 and designed for operation at up to 350 km/h. The line was completed at the end of 2009, but the connections to the Spanish network were not ready until December 2010.

According to the Spanish Ministry of Development, 14 503 passengers used the new link during its first month of operation, including 2 628 travelling between Barcelona and Paris.