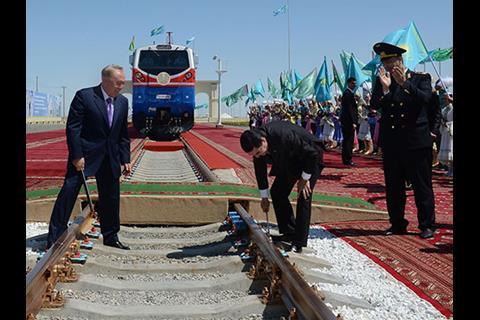 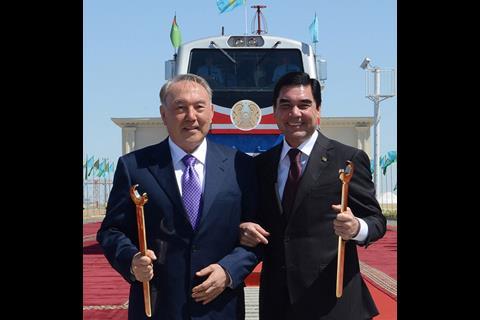 ASIA: President Gurbanguly Berdimuhamedov of Turkmenistan and his Kazakh counterpart Nursultan Nazarbayev wielded a pair of golden spanners to ceremonially tighten the final bolts to complete a rail link across the border between their countries on May 11.

Built by Kazakh national railway KTZ and local contractors at a cost of 65bn tenge, the 146 km line runs from Uzen (Zhanaozen) in Kazakhstan to the Kazakh border facilities at Bolashak, then crosses the frontier to serve Serhetyaka in Turkmenistan. The project was approved by the two governments in October 2007, and construction was officially launched on September 30 2009. The main traffic is expected to be oil products and Kazakh grain.

The new line replaces a circuitous route through Uzbekistan, and forms the first phase of a US$1·4bn north - south corridor linking Kazakhstan, Turkmenistan and Iran which is nearing completion. From Serhetyaka, the 1 520 mm gauge north-south line will run 470 km through Gyzylgaya, Bereket (formerly Gazanjyk) and Etrek to the Iranian border, where there will be a break of gauge.

In Iran, a 70 km standard gauge line from the border to Gorgon on the existing rail network is nearing completion.

The north - south corridor will provide Kazakhstan and Turkmenistan with access to the Persian Gulf and the ocean, which the Central Asian countries expect will lead to an increase in trade with the Middle East, south and southeast Asia.

'The railway is a significant contribution to improving the well-being of our peoples', said Nazarbayev at the cross-border opening celebrations. 'In addition to the direct economic benefits, the railway is an effective way to further strengthen the good-neighbourly relations.'

After cutting a ribbon at Serhetyaka, the two presidents went online to join celebrations of the opening of Bereket station, where the north - south corridor will meet Turkmenistan's west to east route linking Turkmenbashi with Ashgabat.