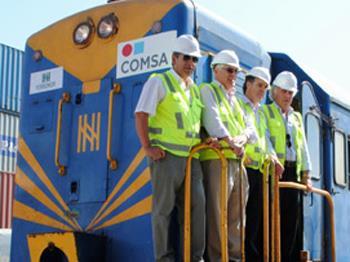 CHILE: The reopening of the 206 km railway between the port of Arica and the Bolivian border at Visviri moved a step closer this month with the operation of the first test train along the entire route.

A locomotive hauling six wagons carrying track materials left Arica at 18.07 on January 9, arriving at Visviri at 09.45 the following day after stopping at Puquios to change crews.

Restoration of the Chilean section of the 1 000 mm gauge railway built to connect Arica with the Bolivian capital La Paz has been undertaken by Arica port authority EPA at a cost of US$45m and has taken two years to complete.

Work undertaken by Comsa has included laying 67 500 m of rail on 73 000 timber sleepers to enable freight trains to operate at up to 40 km/h.

'The track is physically operational from beginning to end, which means that beyond the administrative formalities and meeting a few more milestones, which will be done in February, we can announce that the route is fit for traffic along its entire length', said EPA President Francisco Javier González.

Once certification is obtained, it is intended that the infrastructure will be handed over to a subsidiary of state railway EFE which will be responsible for maintenance and managing operations.